Although the application has received 225 letters of support, objections from the likes of Sport England, Island Roads, Ryde Town Council and Southern Vectis are starting to emerge, with many of them citing a lack of detail in the application. 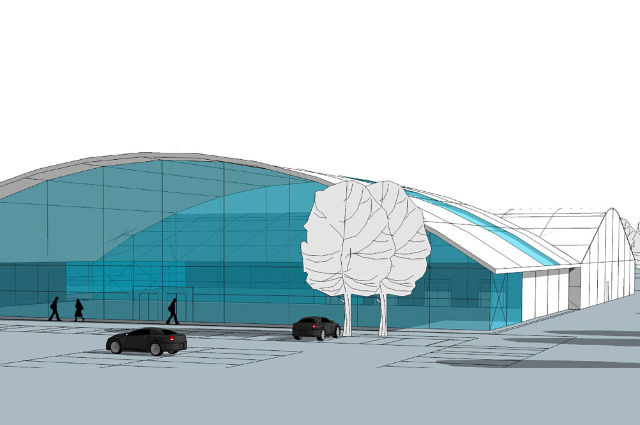 The planning application by Smallbrook Ice and Leisure Centre (SILC) for a new ice rink and leisure centre on land behind Smallbrook Stadium has attracted 225 supportive comments via the Isle of Wight council’s Website.

However, objections from the likes of Sport England, Island Roads, Natural England, the Ryde Town Council and Southern Vectis are starting to emerge.

“It is hard to recall such a poor Transport Assessment that does not consider the transport generation, modal split to such a development and impact on the network whilst at the same time simply wishing that the site would be sustainable in transport terms.”

Mr Walker went on to say,

“We are perplexed by the simplistic concept of how public transport may access the site.”

The applicant had stated in their application that:

“We are confident that demand for the new facilities may motivate the bus company to introduce an additional bus from the hovercraft or Fastcat, otherwise a local coach service may be employed at peak times.”

“Not enough detail”
Island Roads have objected to the application, as has Ryde Town Council (RTC), who support the idea, but not the location.

The RTC planning committee were concerned “not enough detail was contained within the proposal to make an informed decision”.

The Ryde Society joined those objecting to the application saying,

“This proposal is in the wrong place – as the comments from Island Roads, Sport England and the discussions at Ryde Town Council Planning Committee point out.

“We therefore object on planning grounds.

“However, were it on the Esplanade, it could be a wonderful development with a generous benefactor and The Ryde Society would totally support it.”

You can read the full comments by Southern Vectis, along with other consultee responses can be found on the iWight planning Website.

See the SILC Website for full details of the plans and upcoming events.

newest oldest most voted
Benny C
Surely Council planners are involved in pre application discussions for major projects like this. If the applicant goes ahead with a substandard submission that’s their call, but if our own planners have failed to advise effectively then a pointless waste of effort addressing the concerns follows. Why encourage wasting resources of others in responding negatively to deficiencies. Why not use the time to get constructive feedback on… Read more »
Vote Up14-2Vote Down
collin

I agree with a lot of this. Will this be waved through, will we have another Pennyfeathers ,Harcourt Sands et al ? Why not sort out Island Roads and Transport issues in advance of the Application , no Sports facility could possibly be built when there is no infrastructure or access .

Cllr Mosdell wasn’t involved was she?

Surely the point is that the old one was barely used and what evidence is there that this will be. Pie in the sky dreams unfortunately….

Vote Up11-5Vote Down
richardshanklinite
Is it not about time that all these so called experts actually helped sort out an important planning application such as this instead of just writing it off. What has happened to the Puckpool building that the council were so keen to say was all happening? What has happened to the £1M? they ‘invested’ in the water generating scheme? Then a company enlarged a Sandown Airport car… Read more »
Vote Up6-1Vote Down
Colin
It’s quite easy to find fault with many planning applications. It wouldn’t take too much effort from the objectors to work with the applicant to help the situation. I would guess that Southern Vectis would be game for any route from which they could make money. It wouldn’t be too hard to divert a service to call at the new rink site. As for the Ryde Society… Read more »
Vote Up19-29Vote Down
juliancritchley
Nowhere is perfect, true. I would have thought, however, that the Westridge site would be more promising. Because of the Tesco, the traffic infrastructure is already there, and there’s already a sports facility there with squash courts and a gym, plus, I understand, a disused swimming pool. Decent amount of land too. It may well be, of course, that the site was considered and rejected for some… Read more »
Vote Up200Vote Down
collin
Actually Colin and Julian there is a perfect location, Ryde Seafront. True the current building is not fit for purpose and subject to a legal wrangle, but Ryde should not forfeit its Seafront amenities, IOWC should retrieve this site and build the Iconic attraction the Regeneration team suggested with the ice rink as its centrepiece . It should not be transplanted to the playing fields of Ryde… Read more »
Vote Up7-1Vote Down