Our neighbours across the water, Portsmouth City Council, have just become one of 49 local authorities in the UK to declare a climate emergency. 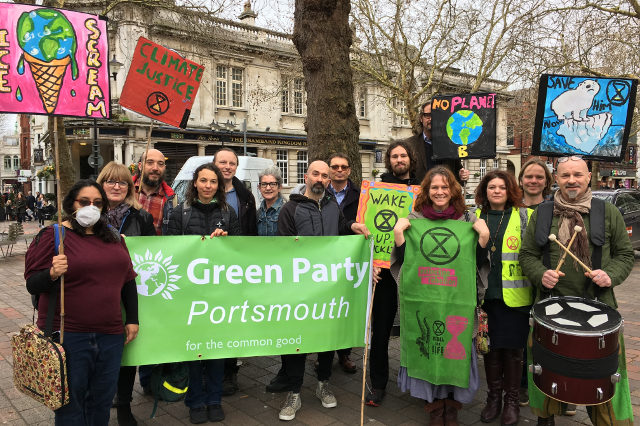 “If we don’t act now we can wave goodbye to Portsea Island” – Portsmouth councillors unanimously declared a climate emergency in the city.

In what was described as an ‘historic act’ Portsmouth City Council today vowed to tackle climate change to the best of its ability including a pledge to achieve net zero carbon emissions by 2030.

This makes it one of 49 local authorities in the UK to declare a climate emergency.

Labour Party motion
The notice of motion was put forward by Labour members Councillor Judith Smyth and Cllr Tom Coles following lobbying from campaigners Extinction Rebellion and the city’s Green party, and received applause and support from all councillors.

During full council Cllr Smyth urged her peers to back the pledge.

“As many of you know I babysit my grandaughter two days a week and it is with her in my heart that I urge you to vote for this.

“Unless we do something there won’t be a future for her and other children.”

“I hope we can declare a climate emergency and ask other businesses to sign up.

“We must make a plan that we are accountable for – we need more than words. The first steps leading to change are about requiring the leader to report back on this in six months. The council should also produce an annual report on this.”

Mason: Work needed or “we can wave goodbye to this island”
Lib Dem Cllr Hugh Mason voiced his fears. He said:

“Over the past decade I’ve been particularly concerned with the Southsea sea defences as well as the defences for Portsea Island as a whole.

“Regarding rising sea levels I have become very worried in the past few weeks.

“It has recently been reported that temperatures on the island of Spitsbergen in Norway have risen by 4C in 40 years. And winters there are now 7C warmer than they used to be.

“This motion is so important. There’s a lot of work to do and it must be done without delay because if it doesn’t we can wave goodbye to this island.”

Target to be zero carbon by 2030
For activist and Green campaigner Tim Sheerman-Chase the support was promising.

“The target to be zero carbon by 2030 is very ambitious and I am concerned whether sufficient measure will be taken toward achieving it. This will also be a big change to people’s travel habits and will hopefully improve everyone’s health due to better air quality.

“Central government will have to take the issue seriously and provide funds for the radical change we need.”

Other measures
It comes after council leader Cllr Gerald Vernon-Jackson revealed he had written to MP Michael Gove, the secretary of environment, food and rural affairs, to ask for financial support to improve air quality in Portsmouth.

If the council is unable to prove it can reduce air pollution by October this year the government could enforce a clean air zone on the city.

newest oldest most voted
hialtitude
Congratulations to Portsmouth City Council and its residents, this is a very worthwhile and concrete step to have taken in the fight against climate change. It is very important that the Island Council adopts a similar stance, we are very dependent on the tourism trade for our economic health. Becoming a destination that has embraced green measures as Portsmouth has done can only improve the Island’s image… Read more »
Vote Up16-10Vote Down
Steve Goodman
IWC response to a recent journalist’s question: “The Isle of Wight Council does not have a declared policy position on your subject matter of ‘climate emergency’ and has no plans to do so in the near future. Therefore, it cannot provide any individual, member or officer, to speak on the council’s agreed position in this matter. Individual members may wish to engage directly with you but cannot… Read more »
Vote Up2-1Vote Down
Steve Goodman

To those paying attention, he ticking of the extinction countdown clock is louder than the brexit one.

Vote Up17-18Vote Down
Colin
Portsmouth City Council has history when it comes to squandering the council tax payers money. It wasn’t long ago that they had to pull the plug on the council sponsored Victory energy company which burned through millions of council tax payers money without even beginning to trade when it finally dawned on them that it wasn’t a magic money tree. Not to mention the millions borrowed and… Read more »
Vote Up4-13Vote Down