Ian Gregory has set himself the challenge of cycling 11,680 miles this year in aid of Prostate Cancer. He was knocked off his bike earlier this week during one of his training rides to London and back. Details within. 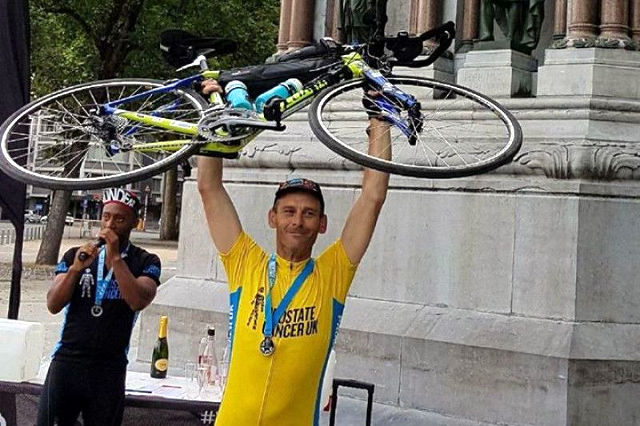 Islander Ian Gregory, who for the last couple of years has cycled over 10,000 miles each year in aid of Prostate Cancer UK, was knocked off his bike at the weekend.

Despite having Fibromyalgia Syndrome, eight damaged discs in his spine, Arthritis and Tempro-mandibular dysfunction disorder, Ian has set himself the challenge of reaching his yearly target to raise awareness and much-needed funds for the prostate cancer charity.

Lucky that it was not more serious (details below), Ian says,

“I have popped a couple of ribs, my collarbone is higher and tender, my wrist is painful, but I’m fine.”

How it happened
As part of his training rides and clocking up the miles for his 11,680 mile target (why this number?), Ian rides up to London on a Sunday, stays overnight at a Travelodge, and then rides back on the Monday. He chooses these times as it’s the cheapest option for accommodation.

Ian explained what happened when he was knocked off his bike this week,

“I was not in any rush to get home and was riding with all lights flashing away when just south of Ripley an elderly lady pulled out of a left-hand junction and slammed me against the driver’s side of the car.”

Ian admits that due to the shock, he lost his temper and started swearing at the driver, who then drove off without stopping.

“She was probably scared stiff over what just happened. I got the number plate, but when I pulled over to jot it down that’s when I felt the pain and the number slipped from my memory.”

“Give cyclists a few more seconds”
Ian finished by sharing some advice for all drivers,

“I can not believe this happened to me, as we all think we are invulnerable. We all drive, please, just give cyclists a few more seconds, you could be saving their lives.”

Cheaper accommodation?
He’ll be doing his training ride to London and back again on the 24-25th March.

If you happen to know of anywhere Ian can stay for less than £39 per night, please get in touch with him via the fundraising Facebook Page.

Show your support
If you want to donate to the fundraising campaign you can do that via the Just Giving Page.

Ian’s fundraising Facebook Page has regular updates on where he’ll be cycling, including details of his naked bike ride in June.