It can take up to 100 years before the Puya Berteroniana bursts into bloom, but the Ventnor Botanic Garden only had to wait eleven. 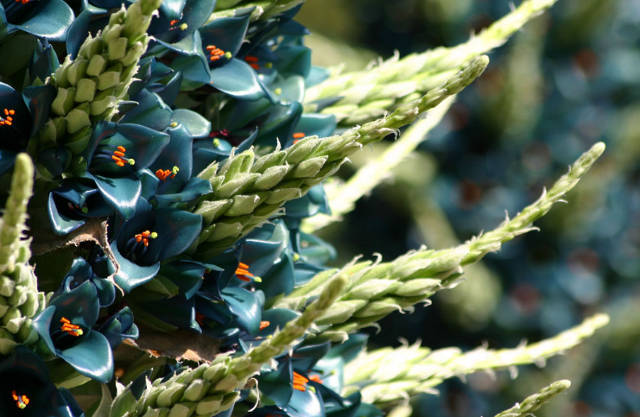 An exotic plant that only flowers once then dies is apparently in bloom at the Ventnor Botanic Garden.

According to the Daily Mail, the Garden’s Puya Berteroniana plant which has been growing at the Garden for the last eleven years, started blossoming yesterday (Wednesday 19th June).

Curator of the Ventnor Botanic Garden, Chris Kidd, says the flowers are expected to last two weeks. He told the paper,

“The Puya berteroniana is a monocarpic plant which means it flowers just once and then dies. It will be in flower for a couple of weeks and then hundreds of the seeds will be pollinated by birds, and only one or two of those will survive.

“The colour is an unusual combination, usually flowers are pollinated by flies who can’t see the red spectrum, but birds can pick up the orange on the blue background. The weather patterns are changing, we had a very wet year last year and it has also been very cold, so the weather might have something to do with it flowering now.

“They are native to the Andes in South America where conditions are very arid and the leaves are covered in a waxy substance to protect them. The Puya berteroniana can grow up to 10ft tall and last for 100 years before it flowers, we have had this particular one since 2002.

“Although they normally flower in the summertime it is a waiting game as you can’t tell when they are going to.”

Image: Genista under CC BY 2.0