The Regatta had a near record entry of one hundred and twelve crews and scullers from the thirteen participating clubs. 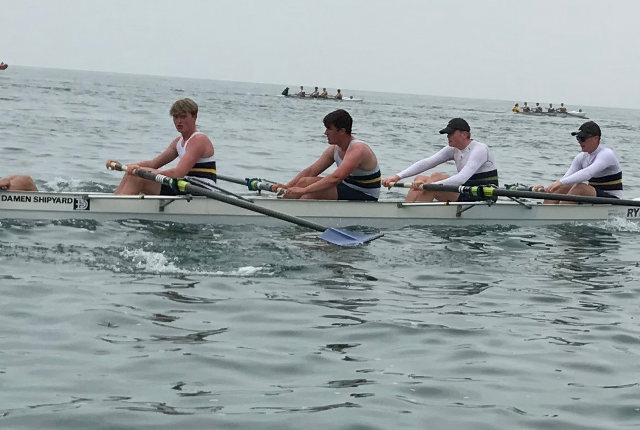 The Regatta had a near record entry of one hundred and twelve crews and scullers from the thirteen participating clubs – including the hosts Ryde – and two other Island Clubs – Newport and Shanklin and the Ryde School Boat Club making the first appearance in a Hants & Dorset ARA Regatta.

Nineteen events
This lead to a packed program of nineteen events over the 1890m Ryde Regatta course – which runs from Appley Beach out towards Ryde Pier where the crews and scullers make a racing turn before racing back to Appley.

For the Ladies there was racing for Seniors, Coastal Juniors and Masters plus Coastal Junior Pairs and Coastal Junior and Novice Single Sculls.    There was some exceptionally close racing in conditions that were close to perfect.

Club supporters
The Club are indebted to their main Regatta Sponsor, TLM Laser, and to the other event sponsors and for the support of the IW and Ryde Town Councils – and in particular to Ryde Inshore Rescue who provided the safety cover afloat.

There was a mixed set of results for the Wightlink sponsored Ryde Club over the two days of racing. See the Website for full results.

Men’s races
The Men’s Senior Four of Matt Allsopp, Ollie Bottrell, Sam Cocker and Ben Ade and coxed by Bryony Reeve failed to repeat their success of the previous week although this scratch crew did well to finish in fourth place in both days.

The Men’s Coastal Junior Four of Tom Starkey, Austin Smith, Ben Sanderson and Tye Cameron and coxed by Dan Sanderson (pictured below) did well to qualify for their final on both days but struggled in the final finishing in sixth place of the Saturday and fifth on the Sunday.

Tom Starkey and Ben Sanderson then competed in the Men’s Coastal Junior Pairs where they finished well down the field on the Saturday, but producing a much improved performance of the Sunday finishing in third place.

Tye Cameron teamed up with Joel Smith and also raced in the Men’s Coastal Pairs but finished well down the field on both days – however there was a more encouraging performance by Joel in his Junior Single Scull event where he finished in second place of the Saturday and fourth on the Sunday.

His younger brother, Austin, competed in the Men’s Novice Sculls each day finishing fifth on the Saturday and third of the Sunday.

The young Men’s Novice Four of Paddy Kearney, Jonah Lewin, Harry Jones and Gulliver Rhogan and coxed again by Dan Sanderson found the competition too strong for them finishing well down the field on both days.

They competed again in Boys J16 Coxed Four at Shanklin of the Sunday finishing in third place.

Women’s races
The even younger Ladies Novice Four of Poppy Starkey, Freya Drage, Niamh Edwards and Emily Davis and coxed by Allan Evans did well to finish fourth on both days.

There was also an excellent performance by the J16 Mixed Coxed Quad of Dan Sanderson, Frankie Leftley, Harry Jones and Poppy Starkey and coxed by Joel Smith, at Shanklin on the Sunday – where they finished in second place.