In keeping with the Conservation Area, the bollards should prevent drivers being able to navigate over the edge of the steep terrace 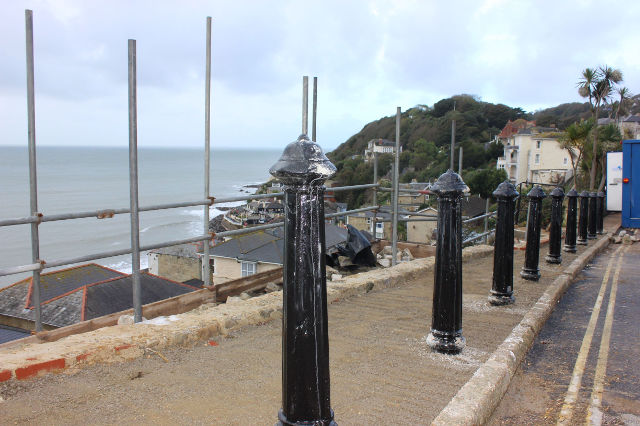 Work by Island Roads in Belgrave Road, Ventnor, is seeking to make the road safer whilst preserving the town’s special character.

Island Roads is currently replacing the section of parapet damaged in a road traffic incident late last year. The challenge has been to come up with a design that complements the surrounding street-scene – that lies in a Conservation Area – but that is strong enough to prevent a similar incident happening again.

Hodson: We have had to be creative
Island Roads structures manager Ian Hodson said,

“The usual highway engineering solution would have been to erect a steel safety barrier at this location.

“The trouble with that solution was that it would obviously not have been in keeping with the coastal and Victorian character of much of Ventnor and was unsuitable for the narrow one-way road without losing the only footway, so we have had to be creative.”

Reinforced cast iron bollards
The solution, agreed after consultation with the IW Council’s Conservation Officer, has been to install traditional-looking cast iron bollards reinforced by steel inserts that are far more in keeping with Ventnor’s charm, but at the same time will prevent vehicles leaving the road and going over the top of the retaining wall.

The original cast iron parapet was too badly damaged to be repaired, but a new one of similar appearance will be installed as a pedestrian restraint.

Weather permitting will be finished soon
The work, to be undertaken over four weeks, was delayed until after the summer holiday season, and has required traffic management.

“We would like to thank residents for their co-operation and understanding during this work which is due, weather permitting, to finish on 18th October.”

The scheme is part of the Island’s Highway Improvement Programme which is finance in the main through a grant of £477 million awarded by the Department of Transport.

I am delighted to see work in progress at last. It’s been a long time coming. But I like the idea of these Victorian-style bollards to protect pedestrians from any other crazy motorists out there.

Vote Up24-2Vote Down
Benny C
A great result if a little late arriving, and a welcome win for important streetscape aesthetics over ‘the usual highway engineering’ approach. Well done all involved. Smart thinking. This island thrives and relies economically on its visual charm – varied and dramatic landscapes, attractive seafront towns, well kept High Streets, all accessible to visitors who spend millions through island businesses every year. If the message to the… Read more »
Vote Up24-3Vote Down
hermit

Wasn’t the person that did this drunk driving though?

And have they been made to pay? Rather than us……

Forgive me if I’m being stupid but from looking at the picture surely wheelchair users and prams will now have to go off the pavement and into the road. Bearing in mind the pavement on the other side has been cordoned off forever isn’t this a bit daft?

What did happen to the perpetrator of all this damage? Was she fined? And shouldn’t her insurance company have to pay for the repairs?