It’s taken a Freedom of Information request to find out some details of what happened on the Floating Bridge last September that led to a crew member being air-lifted after a serious incident. 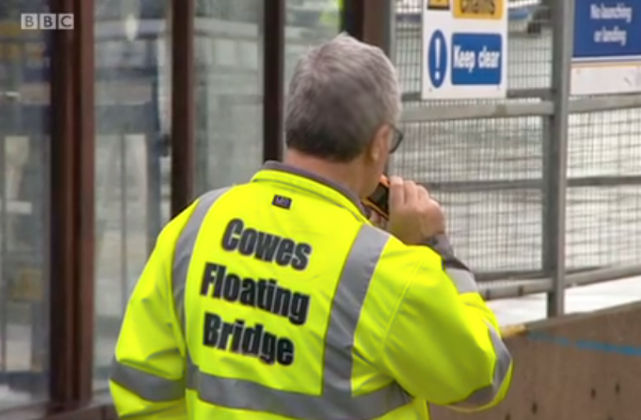 A Freedom of Information Request about the incident that took place on the Cowes Floating Bridge last September and resulted in a member of staff having to be airlifted to Southampton General Hospital reveals failures by Isle of Wight council (IWC) management.

OnTheWight has been posing questions to the council to try and get to the detail of what happened, but the council has been, to say the least, shy about sharing details about the event and its aftermath.

The UK is very fortunate to have the Freedom of Information Act, to open up the details in these circumstances. Happily a concerned Island resident, Cameron Palin, had requested a copy of the council’s internal report into the incident, which he has shared with OnTheWight.

“Risk assessments associated with engineering activities on the bridge are neither suitable, nor sufficient”

The incident which led to injury
While it’s understood that it’s only right the identity of the staff member should be protected, quite why the Incident Report has been so heavily redacted is unclear. The details of what actually happened on the floating bridge last September are equally unclear.

However, what has been made public reveals that work to change the oil filter led to a leak of hydraulic fluid in the engine room.

The council’s Incident Report – prepared by their own Health and Safety team – states the leak couldn’t be stopped because one of the bolts had been cross-threaded and therefore unable to be tightened to reseal the housing.

Decision to keep service running exacerbated problem
An engineer was called to fix the problem, but wasn’t able to arrive for three hours and the decision was then taken to keep the floating bridge in service – which the report states “exacerbated the leak”.

The report refers to “discrepancies between the accounts of floating bridge staff and managers at County Hall regarding the decision to keep the service operating last September”.

Following the incident in the engine room, the bridge remained on the east side of the Medina, eventually becoming grounded, whilst the emergency services (Police, Fire, Ambulance, Coast Guard and an Air Ambulance) attended the scene.

What happens next?
Now the internal investigation has taken place, an action plan has been recommended. It suggests that all risk assessments and method statements associated with engineering activities on the floating bridge are reviewed and updated to ensure they are suitable and sufficient.

It also recommends that floating bridge staff receive regular 1-2-1 sessions (as per council policy ), adding that

Given the many changes and negative publicity in relation to the floating bridge the Council as the employer should be supporting staff and a good start would be to conduct a wellbeing survey amongst staff to identify the key stressors to be addressed.

Finally, it also suggests there that better arrangements for lone working below decks be provided.

Just how much of the report has been redacted can be seen below.

I hope the Health and Safety Executive is investigating this!! Also, why is so much redacted? It’s fine to protect the identify of the staff members but not what happened, especially if it could have impacted the safety of the staff or other people onboard….

Vote Up50-1Vote Down
walkingwizard
This report is shocking. How can they not have method statements for safety critical activities and the fact that risk assessments and method statements were almost useless. Who was the “Designated person” who signed all these off. I would have thought that they should have reviewed by an external expert due to the complexity and seriousness of the operations that are carried out. This is a major… Read more »
Vote Up390Vote Down
jess

There is so much redacted, I wonder if legal action is coming from injured staff member?

Vote Up170Vote Down
confidential
There is only one person to blame for this dreadful state of affairs; the IW Council Chief Executive, Mr Metcalfe, who as the ‘Replacement Floating Bridge Project Sponsor’ is totally responsible for the inability of the vessel to meet its specified operational requirements and for the apparent lack of clear working instructions for the staff who struggle to make the vessel work. The very least he should… Read more »
Vote Up37-3Vote Down
Alternative Perspective

So much for an open and accountable Council. Clearly they have something to hide!

Looks like another consultants fee coming our way as no doubt there wont be a qualified manager.Might i suggest that the council approach The King Harry Ferry (as i believe they had some input into this part time floating bridge) and see if they have a comprehensive risk assessment and method statement associated with engineering activities on there floating bridge which may help.