The Boys on the Balcony will be remembered this Saturday at the tenth anniversary of the occupation of the Vestas wind turbine factory. 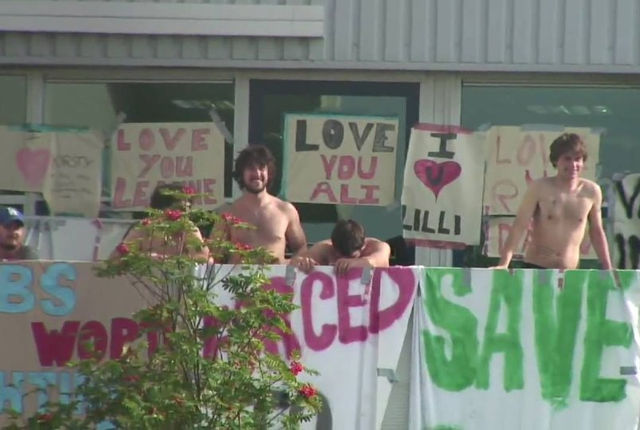 Last Saturday (20th July) marked the tenth anniversary of the occupation by workers of the Vestas wind turbine factory in Newport. This Saturday there’ll be a reunion taking place, which those who supported the workers are invited to.

The three-week occupation in 2009 – the Vestas sit-in – by a group of workers protesting against the massive lay-offs attracted the attention of national newspapers and broadcasters.

High profile supporters
With the national attention came the politicians, Labour’s Ed Miliband and the Green Party’s Caroline Lucas both visited the ‘magic roundabout’ – where supporters set up camp after the workers barricaded themselves into the factory in Newport.

Bob Crow, General Secretary of the National Union of Rail, Maritime and Transport Workers (RMT), was a regular visitor, giving rousing speeches to the supporters and the boys on the balcony, as they became known.

Poetry, art and music
The occupation inspired poetry and cartoons, as well as several rallies through Newport, a picnic at the Job centre, someone scaling a crane in Southampton and a song, The Boys on the Balcony by Seize the Day.

Reunion event
Seize The Day will be playing on Saturday night at the reunion. Supporters are invited to:

So pleased to see this being remembered. Thanks On The Wight!

^^ evident problem with just ‘upvoting’ or ‘downvoting’ a comment – nobody knows why! Would love to hear some debate on this, rather than just a passive, faceless click of a button.

Also remembered; the Campaign against climate change involvement, and the fact that the Island has yet to become one of the places to benefit directly from any of the wind power technology made but never used here.

Vote Up11-3Vote Down
malibuphil
A series of Events that ultimately led me to leaving England altogether. Myself and my partner worked there and campaigned to save it, including meeting Ed Milliband (Environment Minister at the time). Financially we never recovered, we were unemployed for a while, but once back in work we were never able to get the same wages as we had at the factory. Debts built up, could no… Read more »
Vote Up9-3Vote Down
Geoff Brodie
Entirely agree. My memories are being the only Labour/socialist councillor on the Island (as so often) doing my very best to get a new Labour government to secure some sort of rescue package. Even went to see Ed Miliband, the Sec of State for Energy and Climate Change, at Westminster with former MP Andrew Turner and former Council leader, David Pugh. Failed of course. New Labour didn’t… Read more »
Vote Up10-29Vote Down
Ian Young
Whatever you think of new Labour, by 2009 it had run its course and had to all intents and purposes come to an end. By then the Labour party was, for better or worse, slowly morphing into what it has become today. I should also add that safeguarding the interests of working people is not, and has never been, the sole prerogative of the current leader, his… Read more »
Vote Up12-4Vote Down