The decision will be made at the cabinet meeting on 13th October. 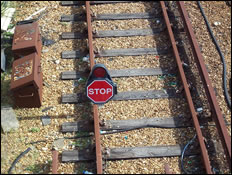 The Ryde Gateway Interchange project, that has been in development for many years, is possibly going to be cancelled on Tuesday next week.

We were given the heads up on this by a commenter on VB, ‘anton‘, and have been researching the story with people ‘in the know’ around Ryde today.

Confirmation of the future of the Gateway being discussed came in the form of meeting notes for the 13th October Cabinet meeting (PDF).

It is recommended that Option 2 is implemented:
Cabinet agrees to terminate the Ryde Gateway Project and, in doing so, agrees to give consideration to allocating £1,500,000 to undertake improvements to the public realm and Council assets in Ryde, aligned with the Council’s corporate priorities, following consultation with the relevant Ward Members and the Town Council.

UPDATE: Sorry, due to a lack of time (how to change that), we didn’t get a chance to get back to this one, but suspect that those interested in the detail would have read through the document PDF themselves.

If you found this article interesting or of value, please consider supporting the work of VentnorBlog.

20 Comments on "Ryde Gateway Interchange Project Could Be Cancelled"

Why do proverbs about organising parties in a fermentation plant spring to mind?

Vote Up00Vote Down
Anton
They can’t even spend Â£6.2 million of someone else’s money. They’ve tried blaming everyone through the years since they took responsibility for it. Last time they managed to consider it at County Hall they agreed to put Â£1.5 million of our own Island’s funds to it to make up for the cost increase over 5 years of failing to build it. Now they’re turning down the Â£6.2… Read more »
Vote Up00Vote Down
Earl Grey
I have to say having read the paper that is going to the Cabinet, the decision to ‘terminate’ the project seems to be the only right one for the Island. If they had gone ahead it would have left the Council and us as tax payers exposed financially should Network Rail want to take back the new development with 6 months notice. The question that should now… Read more »
Vote Up00Vote Down
Anton
But that’s the same clause that Network Rail have in every single bit of railway land and property across the UK. Even at places like Victoria Station, where the major retailers accept it. It’s a clause specifically designed to allow them to take control in the event of a major disaster so they can rebuild infrastructure. The IW Council knew about the clause six years ago –… Read more »
Vote Up00Vote Down
N0.5

its called ineptitude…this council (and the one before) are incapable of running the Island…even when a consultant they have paid tells them so.

Please Gods let us have some new blood..the old blood is very stale

Vote Up00Vote Down
Earl Grey
Anton, point of information Victoria Station is actually owned by Network Rail. Yes they do have the clause in most of their land deals, but does that mean we should enter into such an arrangement especially as the Gateway development is right next to an unpredictable natural hazard(the sea)? However you miss my point about the profit sharing clause, which from what I hear is a fairly… Read more »
Vote Up00Vote Down
Anton
Lets face it, they never had any real good tenants to profit share with, they never had any plans to pay to fit out the interior, and they never had any plans as to how they were going to maintain it. Blaming Network Rail is the easy option for a Council so inept that they are about to give back Â£6.2 million for a project they initiated,… Read more »
Vote Up00Vote Down
Earl Grey
There are definitely some hard questions that the Council need to answer on where things went wrong. Firstly why the delays in starting the whole project which meant that the initial grant for Â£6.2 million was never going to be enough to build the new interchange? However rather than focusing on knocking the Council, where should the Council go now in making the Esplanade site a more… Read more »
Vote Up00Vote Down
Meursault
The result of this saga will end up costing us more money. The interchange will remain dormant for another year or two and then the Council will agree to invest a substantial amount of OUR money in this project under the same network rail terms without the extra cash from central government. Because through their posturing and complete incompetence they will duly have to pay for the… Read more »
Vote Up00Vote Down
Steve

All of this gives me a bad feeling about the Roads PFI. What other projects could go wrong?

Vote Up00Vote Down
Anton
Earl Grey We have a right to be negative. These people are either elected to look after our interests and spend our money wisely, or in the case of officers are very well paid to ensure that these projects happen properly. These same councillors spent millions on an investigation into the Undercliff contract – are they prepared to let soemone independent carry out an inquiry into this?… Read more »
Vote Up00Vote Down
David

To me personally, this just screams “Typical Isle of Wight Incompetence…”

David, the Island does not have a monopoly on incompetence, I would point out the ongoing eyesore that is the old Battersea Power Station site and the collapse of Metronet who were supposedly renovating London Underground.

Vote Up00Vote Down
David
I completely agree and I’m not denying for an instant that London has many faults, but they have many more positives that outweigh these. For me the Island has friends, family and a brilliant natural environment. Most investment on the Island (I would argue) is short-term and often comes in over budget and a lesser product (like many other councils I guess). The blunderings with this interchange… Read more »
Vote Up00Vote Down
L Pinkerton

I assume this is Edward Giles'(once of Buckle and Drew in Ventnor)contribution to the Island.

Vote Up00Vote Down
muso-activator
Well here’s another surprise. One of the 1st impressions of the Island screwed up again. Well at least they painted the breezeblock wall at the bus station southern vectis green. lol Community pride my ass! Bring is some people who care…please! On another rant….After issuing out free grants to paint fascia’s in Union Street I noticed a traffic warden trying to issue a ticket on a skip!… Read more »
Vote Up00Vote Down
DJ

No they didnn’t. Even though they had been evicted and had to take all their signs and information down so the demolition could start, and spend tens of thousands on new premises, Southern Vectis went in about a year later and did all the painting and signing again because it was such a disgrace and the Council took no responsibility for it.

I personally dont think we need the interchange, when the existing layout has worked for many year, and that the existing building only needs a tidy. the new interchange would have just been a waste of money spent on ryde.

Even so, the Council made Islandline chuck out Southern Vectis and all the shops etc in there. They moved to replacement premises and now the rentals and rates aren’t funded. The Council needs to take responsibility for what’s left.