Sponsors, supporters and helpers of Ryde Rowing Club were entertained at an informal gathering at their Clubhouse on Friday evening (25th January) to thank them for their support during the last year. 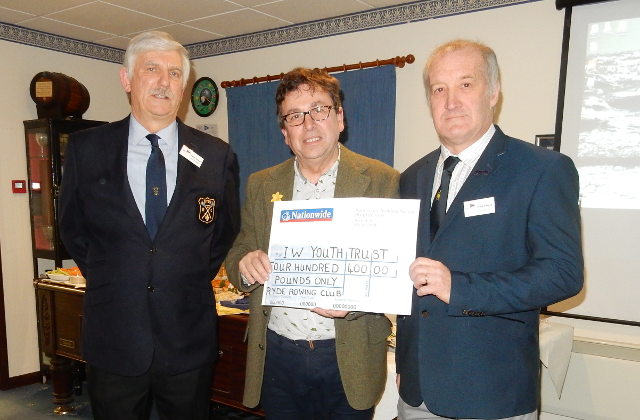 Sponsors, supporters and helpers of Ryde Rowing Club were entertained at an informal gathering at their Clubhouse on Friday evening (25th January) to thank them for their support during the last year.

The Club President, Peter Allsopp, welcomed and thanked all those in attendance and offered a special thanks to the Club’s main sponsors, Wightlink, and to the main Regatta Sponsor TLM Laser.

The Club Captain, Graham Reeve, then talked briefly about the Club’s activities and success in 2018 which was followed by a short audio visual presentation.

New Boat Building project
Senior Club coach, Micky Jenner, briefed those in attendance about an exciting new Boat Building project the Club has embarked on – to produce a mould and Coastal Fours – built on the Island by AB Composites of Cowes – with the support of Wight Aid who were represented by Trustee, Brian Marriott.

The Club’s New Coastal Scull – which had been supported by Yarmouth Harbour Commission – represented by Tim Adams – was also on display in the Boathouse.

Cheque presentation to Youth Trust
This was followed by a presentation to Michael Lilley, a Trustee with the Isle of Wight Youth Trust, who – working in conjunction with Wightlink – were the Club’s nominated charity, once again in 2018.

Following various fund raising activities – the club was able to hand over another cheque for £400 to the Isle of Wight Youth Trust. The IW Youth Trust are a charitable independent and professional organisation offering counselling, advice, information and support services to young people under 25 on the Isle of Wight and, in some cases, their parents or carers and the Club were delighted to be able to support them once again.

£1,000 from Churchers
The Ryde Solicitors, Churchers, represented by Ian Heal, attended – and have supported the Club for a number of years – and Ian handed over a cheque for £1,000 to the Club towards their boat building project.