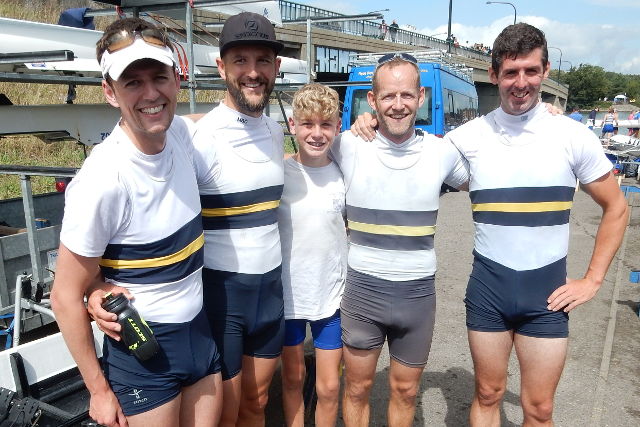 Ryde Rowing Club competed at the last Hants and Dorset Regatta of the season on Saturday (17th August, 2019) hosted by BTC Rowing Club but switched from their usual Western Shore, Southampton venue to the home of Coalporters A.R.C. at Northam Bridge, Southampton, because of the weather forecast.

This meant a complete re-draw and restricted entries that lead to the Club J16 Four and the third Senior Pair being unable to compete.

However the Wightlink sponsored club achieved a notable success when their Men’s Senior Four, a crew of Ollie Bottrell, Matt Allsopp, Mark Chatwin and Mike Ewing, coxed by Owen Barnaby – won their event in style to ensure selection to represent the Association at the Southcoast Championship in Dartmouth, Devon in September – the 38th time the Club has received this honour.

A second Senior Four of Nick Pike, Max Murdock, Tom Hammond and Alex Miller coxed by Rebekah Edgar  – finished third in the heat missing out on a place in the final.

The Club also had two Senior Pairs racing – the A Crew of Ollie Bottrell and Mark Chatwin – and the B of Mike Ewing and Alex Miller  – but both failed to make the final however in the single sculls Mike Ewing convincingly won his semi-final in the Senior event and finished second in the final but Joel Smith in the Men’s Coastal Sculls failed to make his final as did the young Austin Smith in the Men’s Novice Sculls event.