For those who were worried that the Ryde Slide might come to an end after Bestival left the Island, here’s news of the new sponsor. 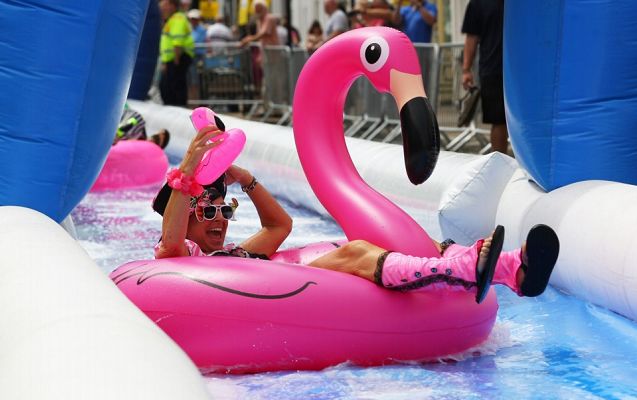 This in from the organisers of the Ryde Slide. In their words. Ed

The Ryde Slide, sponsored by Wightlink, returns on Sunday 16th July and will be bigger and faster, than ever. The 200-metre inflatable water slide on Union Street will be in action from 11am until 6pm, providing a fantastic opportunity to have fun and raise money for local good causes at the same time.

This year, sliders will be heading down the hill at a speedier rate due to the slide being placed at a steeper point on Union Street and again, local firemen will be on hand to help along with a water blast!

This popular, family-orientated event, is now in its third year and will be dedicated to fundraising for local Ryde charities including The Waterside Trust, Aspire, Wight Brainy Bunch, Firefighters Charity and Ryde Inshore Rescue.

“We’ll be moving the slide further down Union Street, so there will be a faster finish at the Esplanade roundabout. The firefighters will be at the top, giving you a push, with the Ryde Inshore crew catching you at the bottom.”

This year it could not be simpler to get your tickets. Simply visit the website to buy your tickets and choose the time-slot that you wish to slide. Tickets are sold at a first-come first-served basis, although there might be a limited number available on the day, it is recommended you purchase in advance to guarantee your slide slot.

which webside to purchase tickets>