Ryde Town council: No rise in the precept, staff restructure and plans for the future explained (updated)

After Friday’s rocky meeting, some positive news comes forward from Ryde Town Council. As well as setting out plans for the coming year, shedding light on the recent departure of two clerks, there will be no rise in the precept, says the Mayor. 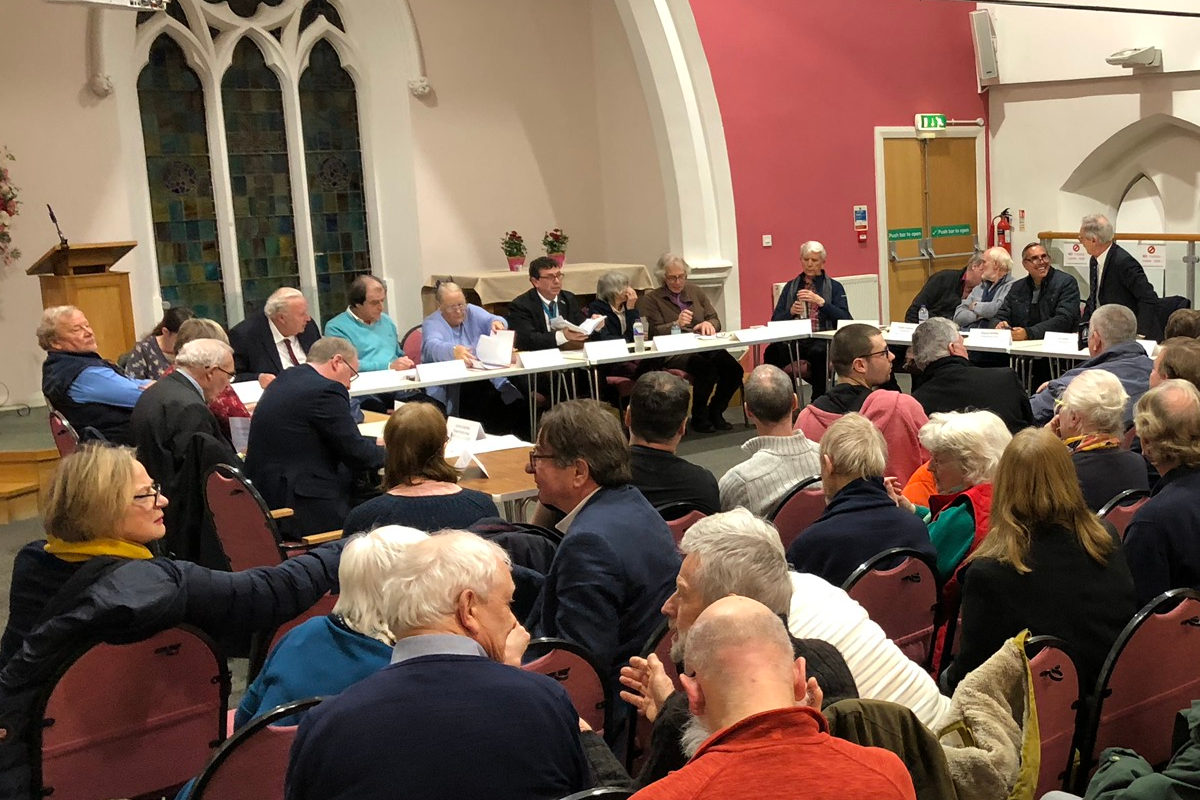 With the defeat of ‘no confidence’ motions behind them, Ryde Town Council (RTC) have set out plans for what they see as a bright future for the town and shed light on the recent loss of the two clerks.

“Through careful financial management and reorganisation in 2019/20 financial year, the council is in a good position to move ahead with exciting new projects in the 2020/21 financial year.”

Savings made through staff reorganisation
The Mayor of Ryde, Cllr Michael Lilley explained,

“We had to make some tough decisions at the end of 2019. These will enable the Council to restructure in order to manage our budget effectively and efficiently.

“We are in the process of reorganising our staff team so we are ready to deliver key exciting projects over the next year.  The new Historic High Streets Fund project will start, we are considering taking over Ryde harbour and exploring how Ryde Theatre can be brought back in use.

“The last year has been exciting but democracy does often involve disagreement and this resulted in last Friday’s two significant meetings.

“At the first meeting the majority of members voted through changes such as making the ten year old posts of two clerks redundant and creating a new post of Town Clerk/Chief Executive. At the second meeting members opposed to these changes called a no confidence vote in the Mayor, myself and my colleagues.

“I thank the majority of members for their confidence in us and the Ryde First team. This is democracy at work. I totally accept that we need to improve our auditing processes and reorganisation with a transparent independent review.

“We need also need to be a responsible employer and this includes confidentiality of employee issues as stated in legislation. Recent events have meant members have been confused between secrecy and confidentiality. This needs to be addressed and will be. We now move forward with the ability to improve Ryde for the benefit of its residents with a balanced budget and no precept rise.”

Progressive changes
The RTC explain the majority of councillors led by Mayor, Cllr Lilley, have progressively pushed through changes in the past year. These changes were touched on by Cllr Axford during last Friday’s meeting and include:

A programme of actions to improve employee conditions and make efficiency savings was approved at last Friday’s meeting.

“One where the press and public were excluded rightly due to discussing a range of employee issues which under Standing Order 54 and 70d are clearly confidential and in accordance with GDPR, Human Rights Act and Employment Legislation.

“The second was properly in public. At both meetings there were democratic votes. RTC had discussed issues and voted democratically. We have no Full Council Meeting between 2nd December and 3rd February.

“Extraordinary Meetings of the Full Council were called to resolve important issues which is exactly what has been done. A clear majority had confidence in members in positions on Council and a clear majority approved decisions to move the Council forward as a responsible employer and push forward opportunities for the Town.”

Lilley: “Ryde is growing but the precept will not be going up”
Cllr Lilley finished by saying,

“The key focus for Ryde Town Council is to move positively forward. The Finance Committee Meeting last night (Tuesday) was positive with nine members discussing how to support the community and voluntary to grow.

“We explored how we could support events such as the classic car extravaganza grow and the Tour of Britain Cycling event is coming to Ryde in 2022.

“It was lively and enthusiastic. Ryde is growing but the precept will not be going up, although this needs to be confirmed  at 3rd February Full Council.

“The Finance talked about how the Council can engage better with the community and in the next year hold more events to consult with residents on what direction the Town should develop.

“We reviewed reports from over ten community projects such as Ryde Carnival, Aspire, Waterside Community Pool Trust, and Footprint Trust. Ryde TC is a major funder in the Town to grassroots projects supporting residents in some many positive ways. The plan is to build on this good work in 20/21.”

20 Comments on "Ryde Town council: No rise in the precept, staff restructure and plans for the future explained (updated)"

newest oldest most voted
Simon Cooke
I was one of two members of the public who attended the RTC Finance Committee. There were 9 or 10 Councillors present, from both sides of the recent disagreement. All remaining Councillors sent apologies. It was an extremely relaxed, good humoured and productive meeting. Everyone was focused on the best for the town and for properly managing the RTC budget. The vote for keeping the precept the… Read more »
Vote Up230Vote Down
objective1

I am sure that was the case, Simon. However, the Finance Committee can only make a recommendation. Full Council actually make the decision. Cllr Lilley should not have gone to the media in advance of that decision to say “The precept will not be increased”.

Vote Up3-22Vote Down
Simon Cooke
I literally have no idea why you felt the need to direct that comment at me, seeing as I made no claim one way or another. But seeing as you did, you appear to have not read the actual quote from Cllr Lilley above: “Ryde is growing but the precept will not be going up, although this needs to be confirmed at 3rd February Full Council.” This… Read more »
Vote Up18-1Vote Down
objective1

Sorry Simon – I didn’t intend the comment to be taken as it has. I was just making a wider point to anyone who might have been interested in the context.

Vote Up2-7Vote Down
Benny C
So lets Give Ryde TC the chance to shine. I agree they need to sharpen up their procedures and not get sidelined by petty sniping, however accurate. Overall, this feels more energised, positive and accountable, with decent enough pr awareness too. Dinosaur Dave Stewart could learn a lot from this. By comparison, to us folk on the street, his administration self evidently acts very differently – opaque,… Read more »
Vote Up24-6Vote Down
jonathandent10
I have a great feeling the new ‘slimmed down’ Ryde council will provide a positive way forward. Thank goodness the two negative cllrs have resigned after their defeated motions of no confidence. I welcome the idea of having a new CEO type clerk who will hopefully be conversant with applying for the many grants that could be available to the town. Lets face it; as Benny C… Read more »
Vote Up22-6Vote Down
collin

So tired of reading Obj1 ranting comments.
Take your mask off and come to RTC meeting February 3. Introduce yourself ,, mingle , get to know people . Get to understand how the people of Ryde are working with their Council to make their town a better place.

What ranting comments? Just talking about the issue at hand – why won’t you?

Vote Up1-9Vote Down
snowey
Quote Cllr Jordan “At the first meeting the majority of members voted through changes such as making the ten year old posts of two clerks redundant and creating a new post of Town Clerk/Chief Executive.” But the 2 clerks had already been got rid off prior to 20 January 2020, presumably without being offered the opportunity to apply for the new position of Town Clerk/ Chief Executive?… Read more »
Vote Up10-17Vote Down
objective1
They just don’t learn! After the 2 Clerks had already left with huge pay-offs and gagging orders, only then did they put it to Full Council to agree just at a meeting called at late notice (contrary to Standing Orders) to decide to do this. This was only an hour before a meeting, called correctly, to debate votes of No Confidence in those Cllrs that had already… Read more »
Vote Up19-35Vote Down
peterj

Here we go with all this ‘cabal’ nonsense again. All but one (not sure about Cllr Lucioni) of the Councillors are on the Finance Committee. If it passed there, the Full Council vote is literally just a formality.

You really need to stop making things up.

A list of this sinister cabal of all (but one?) Councillors are cunningly hidden away in public view here: https://www.rydetowncouncil.org.uk/the-town-council/councillors-details/

Vote Up11-1Vote Down
objective1
Peterj For pity’s sake! ALL Cllrs are equally accountable for all decisions and such decisions must be taken at Full Council. It is clearly stipulated in the legal Financial Regulations! Setting the Precept level is one of the most key annual decisions! Full Council is not a rubber-stamp process or formality! I think your view that it is suggests not just a lack of democracy, but is… Read more »
Vote Up8-24Vote Down
peterj
You are now at the point of splitting hairs at the atomic level. It is a formality in the sense that any reasonable person would comprehend. I repeat, the Finance Committee is made up of all Councillors (save for the single one I’m not sure about). Do you dispute that? You seek to create discord where there is none. Banding about terms such as ‘cabal’ and ‘tyranny’… Read more »
Vote Up21-3Vote Down
objective1

But until then Lilley & Co can’t go to the media and say “The precept won’t increase”. It really isn’t complicated!!!!

No need to be insulting!

Vote Up1-11Vote Down
objective1
This is a most odd report which is pure PR for Lilley & Co. I find it extraordinary that Mr Lilley can “shed light on the departure of the two clerks” openly in a press release but that he stopped Cllr Critchley even mentioning them, let alone asking for light to be shed, at Friday’s meeting! Double standards or political manipulation to protect him and his secretive… Read more »
Vote Up12-35Vote Down
truth

Vote Up130Vote Down
denbo17
Michael Lilley’s double standards or political manipulation to protect him and his secretive cabal?. Well!, i believe that everyone knows Cllr Lilley and the rest of the Ryde town council. That then just leaves you as the person from the secretive political clique or faction. So can you tell us who you! are Mr Objective 1?. Perhaps I shall give you a nod at the next Ryde… Read more »
Vote Up9-1Vote Down