All three motions of ‘no confidence’ against five Ryde councillors were defeated, with the Mayor adding that he was not opposed to an internal audit or inspection of processes 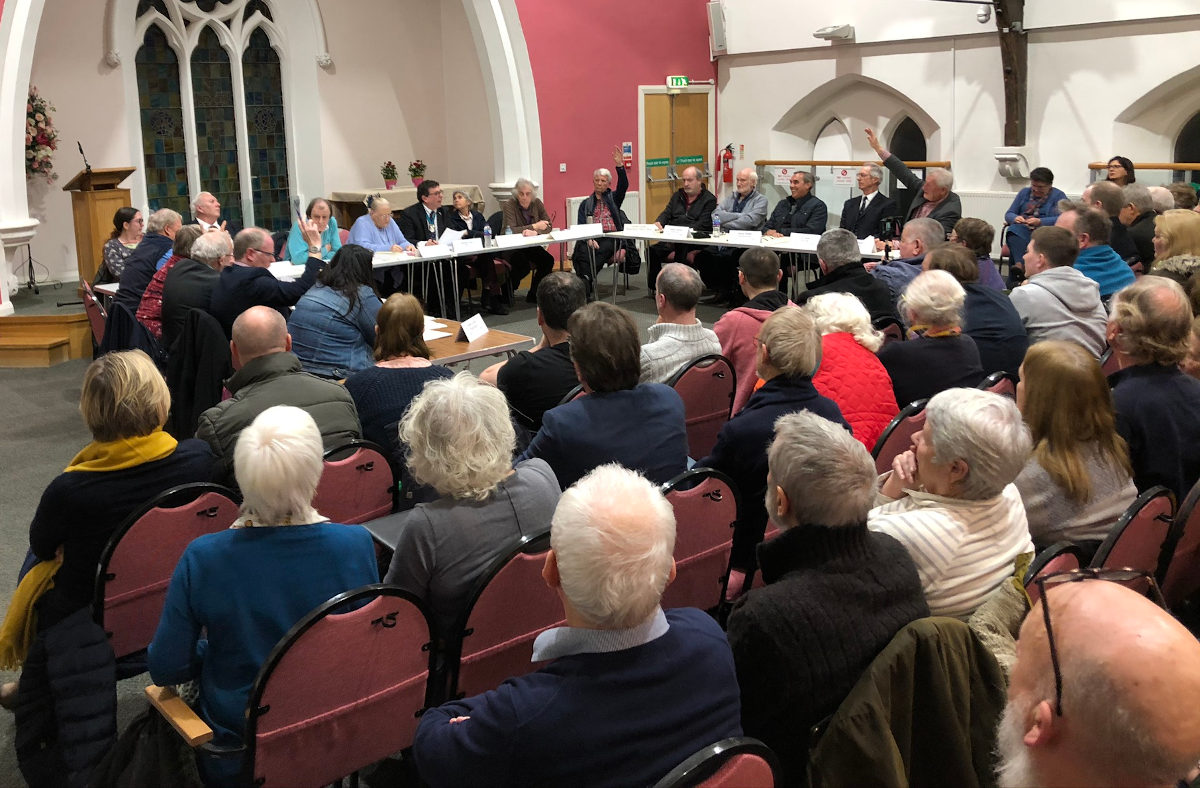 At the Ryde Town Council’s Extraordinary meeting on Friday last week, the three motions of ‘no confidence’ against five councillors were defeated, all to huge rounds of applause from the packed audience (see video below).

Each vote of ‘no confidence’, which called for Cllrs Michael Lilley, Phil Jordan, Adrian Axford, Diana Conyers and Nancy Farrell to step down and allow a fresh election, attracted six votes in favour, nine against and one abstention (Cllr Karen Lucioni).

The meeting was called to hear the motions following accusations of a “lack of transparency, inclusion and respect being shown to colleague councillors and staff”.

When an ‘amendment’ is not an ‘amendment’
When presenting the motion against Cllr Lilley (Mayor) and Cllr Axford (Deputy Mayor), Cllr Ian Stephens attempted to put forward what he called ‘an amendment’.

Following recent circumstances surrounding the loss of the two clerks, his ‘amendment’ stated that if the town council agreed to undertake an urgent inspection of the processes of the personnel panel he would withdraw his motion.

The Mayor said he’d no objection to there being an investigation carried out, but the acting clerk, Val Taylor, said this could not be accepted as an amendment, because it was not amending the original motion, but simply creating new motion and only motions on the agenda could be debated.

Stephens: Decisions made by council, not by few
Cllr Stephens said it was important to hold people to account and expected “things to be undertaken properly” by the council.

He said that public money had been used and that Ryde town councillors were “culpable and responsible”.

He added that decisions affecting budgets should be made by Ryde town council as a whole, not by the few.

Cllr Tim Wakeley said that if legal services find the activities were perfectly in order, that will resolve the issue.

Standing order review panel
Cllr Lilley agreed they did need to look at processes and explained they have already set up a standing order review panel chaired by Cllr Temel, adding that it should be going to legal services and talking to the internal auditor. The committee was formed in early December, but should be given more time to put everything in place, he added.

Cllr Temel explained he was simply a retired head teacher, not PriceWaterhouseCoopers [management consultants], and that this was not his sole job.

He added that unless someone wanted to pay him £30,000, everyone needed to work on it.

“Mumbo jumbo” from Cllr Stephens
Cllr Axford said he’d heard a load of ‘mumbo jumbo’ from Cllr Stephens and that he was 100 per cent behind the chair. He told the meeting that in the last six months there’d been a “major sea change” under Cllr Lilley’s mayorship. This raised a huge applause from the audience.

Cllr Axford went on to cite the harbour, town hall, high street, Appley Tower as all things that Cllr Lilley has had a firm hand in moving forward.

The vote
Cllr Wakeley seconded the motion which was voted in favour of by Cllrs Stephens, Moody, Wakeley, Lyons, Adams and Critchley.

Cllr Lucioni abstained, and the other nine councillors voted against it. The motion fell to a huge round of applause from the audience.

Cllr Lilley said he would take on board all that had been said and was pleased the majority of the council have confidence in him.

Motion against Cllr Jordan and Farrell
Cllr Critchley presented the second motion. He started by saying that had Cllr Stephens’ amendment been accepted, he would have withdrawn his motion.

He went on to raise the issue of the two clerks who have left, the circumstances and costs surrounding that. He was informed by the Mayor several times that due to confidentiality reasons he could not discuss staff matters, adding that he would be breaking Standing Order 54a by doing so.

Risk of legal action against RTC
Cllr Critchley went on to say that tax payers need to know how their money is spent and that it was farcical that such a large expenditure had been approved by just six members.

He was stopped by the clerk who gave a warning that unless he wanted legal action against Ryde Town Council, he should stop talking about this issue.

Motion fell
Cllr Critchley went on to argue that the “rules exist for a purpose” and Section 27 stated that any matter which exceeded its budget should be discussed by the full council. He criticised the haste with which decisions were made by the Personnel Panel.

The motion attracted the same voting as the previous, six for, nine against and one abstention.

Cllr Lyons explained that as Cllr Conyers was a member of the Personnel Panel, it called into question her position as Chair of the Planning Committee.

Cllr Lilley said the motion was damaging for Cllr Conyer’s reputation and was surprised Cllr Lyons (a Labour member) was putting a fellow Labour member through this. His comments were met with an angry response and he immediately withdrew the comment and apologised for it.

The motion was seconded by Cllr Adams, but fell with just six votes in favour, nine against and one abstention.

Interruption by Bembridge councillor
Bembridge parish councillor, Cllr Alasdair Steane, was sat in the audience of the meeting and called out twice during the discussions.

Both times attempting to correct the clerk about the process she was following when councillors had to vote on whether to move forward to the main vote. The clerk did not agree with his view.

On both votes a majority of the councillors voted in favour of moving forward, so the number of councillors voting against or abstaining were not counted.

Cllr Steane has subsequently explained to OnTheWight that votes against or abstaining the vote to move forward should have been counted by the clerk ‘for the record’.

Resignations
Cllrs Julian Critchley and Jim Moody have resigned from the council with immediate effect this morning. Read more here.

Article edit
9.39am 22 Jan 2020 – Clarification added as to Cllr Steane’s interruptions during the meeting.

newest oldest most voted
peterj
An excellent report of the meeting where once again OTW outclass CP’s efforts. A couple of things I will add: Cllr Critchley continually tried to talk about the subject he had repeatedly been told he couldn’t refer to, even after he was warned by the acting clerk. His speech was cut short after he was ruled that he ‘would no longer be heard’ by the chair as… Read more »
Vote Up24-6Vote Down
peterj

According to the CP, Cllrs Critchley and Moody have resigned from RTC with immediate effect!