All of the hoopla around the Nokia White Christmas didn’t deliver for all.

It sounds like the much-trumpeted Nokia White Christmas didn’t turn out to be quite the amazing event its promise had once held. 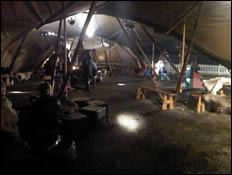 Having not heard much about who had tickets and who hadn’t, we put a call out on Twitter and Facebook late yesterday to hear about people’s experiences. From those we heard back from, it sounds like a bit of a damp squib – shame really because the potential was high.

Anne-Marie Evans told us that her kids were extremely disappointed by it, “It was a lot smaller than expected, no elves and no santa as stated in the County Press and as for Marco Pierre-White inspired food, the only food there was Danish pastries which, although nice, might as well have come from Morrisons!”

No Ho Ho
It can’t be Christmas without a Santa, right? You’d have thought so, but apparently Nokia felt different.

Anne-Marie recounted their attempts to find Mr Claus, “To top it all, when my son asked a member of staff when father xmas was going to turn up, the staff member told him “he’s not” and then laughed!”

Another Islander on Twitter told us, “It was poor to say the least. And fun did not really occur at any juncture. And I am somewhat a connoisseur of all things Christmas!”

David Pugh couldn’t have known about the disappointments when, as the winning of the event was announced, he told the County Press , “We are already working with Nokia to make this a great family event to remember.” Whoops.

Some good bits
It wasn’t all long faces. There were some highlights like “the kids loved throwing snowballs in the snow tent and seeing 2 real reindeer,” which does indeed sound like a lot of fun.

Video footage of the Worthing bash, plays testament to the complaints that it also was pretty tiny and not as exciting as anticipated.

Let down
Anne-Marie Evans’ summation of the Island event was pretty damning, “It was merely what you could see at hundreds of garden centres throughout the UK.”

If your experience was any better than this, share it with others by leaving your comments below.

newest oldest most voted
anita kemp
it was very underwhelming the only bit of real snow was in a 12 ft round yurt which did not look like 8 tons of snow even to my 2 year old. we left after 30 mins very cross that 3 of us had wasted Â£18 on bus fares to get there, and there was no roast beef as promised. i feel extremely let down by nokia… Read more »
Vote Up00Vote Down
keith (the trucker) hibdige

2 blokes from sussex get done for running a con in the new forest by calling it a Lapland Experience, YET somehow Nokia seem to get away with just the same con on the isle of wight. All the reports i have heard have been the same, NO SANTA, DISAPPOINTED KIDS and Naffed off parents. COME ON you Islanders you’re strong enough REPORT THEM !……………………….

Yes, let’s all demand our money back!

Vote Up00Vote Down
Matt
…..from Nokia’s Facebook page: “Nokia UK Enter the Nokia Christmas competition and you could win a fun Finnish Christmas event for your town. Celebrate in style with heaps of snow, reindeers, live music and a seasonal Finnish menu created by Marco Pierre White. Simple vote, then share with friends for the chance to win VIP tickets. So get voting and sharing n…ow: http://www.nokia.co.uk/christmas Join the Nokia UK… Read more »
Vote Up00Vote Down
Helen Cunningham

How LAME Nokia …. you could have really pulled out all the stops and done a fantastic PR event. Suggest you pick an IOW business to handle your PR, they’d do a much better job!
Sony Ericsson girl myself, much better phones! ;-)

Apparently in London they had Lily Allen (who she?) we got a bloke with a uke. I was invited along in the eve but heard it was very disappointing, exactly as described above. Thankfully my kids are a little old for Lapland and decided against going. I’m so glad we didn’t bother. This sounds like a right con.

Vote Up00Vote Down
Jan
I went with my Daughter and grand children. The event was poorly organised, There was nowhere to put rubbish, no hand cleaning facilities for the children doing crafts ( like painting). Marco Pierre White food? Nope,I didn’t see any, just some pastries with a piece of fruit on top. With the exception of the girl running the Pom-Pom stall, the craft staff all seemed pretty fed up.-… Read more »
Vote Up00Vote Down
seb

who was the bloke with the uke?

Vote Up00Vote Down
Real as you

Would love to know how silly County Press and IW Radio feel about hyping the competition so much. They must feel like right numbties.

apparently there were five parties