Matthew shared a video of Facebook where the backs of some carp can be seen out of the water due to the lack of depth in the lake. He’s calling for urgent action 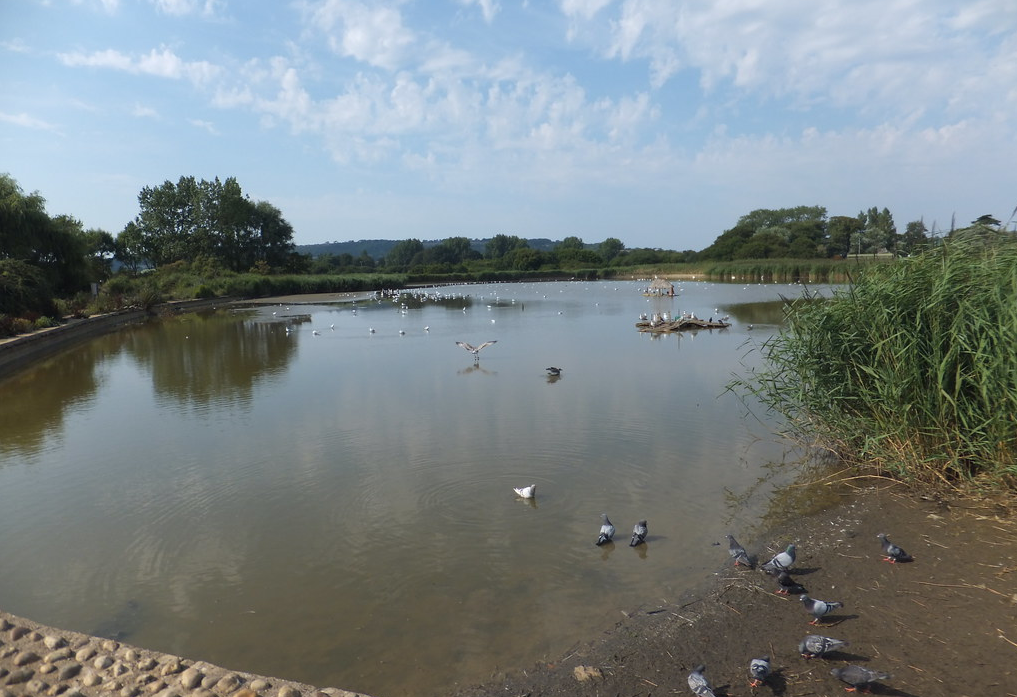 A Sandown man is pleading for urgent action to be taken at the canoe lake by Dinosaur Isle, to save and protect the fish and other wildlife, as some parts of the lake have as little as 10cm of water.

Matthew Sherwood says he has been monitoring the health of the carp in the canoe lake for several years and has previously raised the issue of low water levels.

‘Save the fish’ plea
This year the situation appears to be far worse than ever, and Matthew took to Facebook (Sandown Hub) to share a video of the carp swimming in just 10cm of water and “gasping for air”.

Other parts of the lake shown in the video have even less depth.

Warning against illegal action
The local councillor Debbie Andre said she has a meeting with the Environment Agency this week, but Matthew and many others following the situation say that it will be too late.

“Thank you to everyone who alerted me to this issue. Peace and calm have been restored to the Canoe Lake. The Environment Agency have been contacted and I will be meeting with them this week to discuss a long term management strategy for this area.

“I appreciate Matthew Sherwood’s passion, but have been advised by both local experts and the Environment Agency that it is illegal for any individual to take it upon themselves to remove creatures from an area and relocate them without authority to do so.

“Each creature has to be inspected by an authorised expert before being moved. I wouldn’t want anyone to endanger either themselves or any aquatic life.”

Later in the day she added,

“I have just come back from the lake. I saw no dead fish or any gasping for breath. The fire brigade cannot help as this would deplete valuable water resources at a time of possible drought.

“I appreciate the concern, but I’m listening to the experts rather than get caught up in a FB storm. I cannot condone any illegal behaviour with people taking actions that are not authorised and detrimental to our local ecosystem.”

What can be done?
The responsibility for the lake is in the hands of a private owner (who own 2/3rds) and the Isle of Wight council (as part of their land around Dinosaur Isle).

Several suggestions have been debated on the Sandown Hub Facebook Group, such as moving the fish to a nearby river, asking the fire service to fill the lake, adding sandbags and making a smaller area, but with deeper water for the fish.

Matthew explained that he’d already moved two fish to a deep pool some 30 yards from the lake and was monitoring their health before considering moving other fish from the lake. He said the Cllr Andre’s meeting to discuss the long-term strategy would be too late.

Official response
News OnTheWight have contacted the Isle of Wight council and Environment Agency and will update once we hear back.

Of for goodness sake – the man is trying to save the fish.
If they are moved, and don’t survive – at least someone has tried.
In these day and age it is nice to hear that someone is trying to do something.
Well done Matthew.

Fish can’t be moved, that’s the law, stupid as it seems. Perhaps environment agency or rivers authority are allowed, but not joe public.

Well done Matthew, hopefully someone takes action soon and we dont end up with a load of dead fish there for our visitors to enjoy!

Can’t see our council jumping to it…. Who else can sort the problem ?

Vote Up230Vote Down
sbg
Valiant effort Matthew, such a shame this has been ongoing all weekend. Strange that the local councillor has supposedly been in touch with the environment agency over the weekend, and yet on you phoning them an hour ago it seems they knew nothing about it. We should, of course, bear in mind that this councillor was elected in 2017 with no opposition whatsoever. Since March it would… Read more »
Vote Up13-1Vote Down
Benny C
Send for local help. – where is Sandown Town Council, where is local resident cabinet member Ian Ward? Judging by their performance over the years the town Council might need a picture of a fish to help them identify one. If they revealed they’d no idea there was a lake I’d not be at all surprised. As for Mr Ward, silence, he’s not paying attention again, he’s… Read more »
Vote Up110Vote Down
richardshanklinite

As the treated water from Southern Water must be clean before discharge to the sea why not divert a few gallons?