The debate chairman said change was on the way and it could be “scary”. Catch up on the wide-ranging debate held by the South East branch of the Country, Land and Business Association. 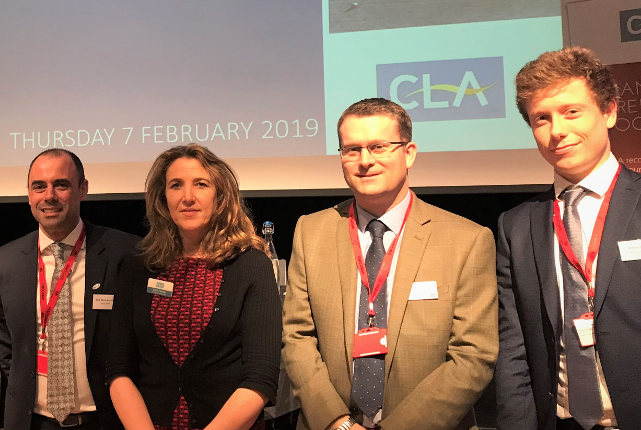 Michael shares this latest news on behalf of the Country, Land and Business Association. Ed

Different visions of what the future of farming may look like were set out during the CLA’s latest debate, with speakers and audience members clashing over veganism’s impact on biodiversity.

While there was acknowledgement of – and enthusiasm for – the need for change among many present at the event, ridding land of livestock was widely rejected as impractical and harmful.

Scientific, vegan and land management voices were among those to feature on the panel, who gathered at MidKent College in Gillingham.

Mr Gildea disagreed with fellow speaker Susan Twining, Chief Land Use Policy Adviser at the CLA, on the issue of animal welfare, arguing he did not believe standards were at a high level. He instead promoted a future vision of plant-based farming where rewilding “can play a key part”.

“If you want to improve biodiversity, livestock are a management tool to help make that happen. Moving all livestock off land isn’t the answer.”

“During foot-and-mouth in 2001, livestock was removed from land and it affected fragile ecosystems even in a short space of time. I can’t see how suddenly taking out livestock production would work.

“We need to produce red meat more smartly, but we shouldn’t demonise meat production and farmers.”

Apprenticeships and training
Training and apprenticeships were identified as vital to the sector’s prosperity over the next decade.

Antonio Fletcher, employment partner at Brachers, said farming populations were ageing and declining, which could cause issues with continuity and sustaining levels of production.

“It requires investment and skills in the workforce. Apprenticeships where you can earn and learn offer a solution to appeal to the millennial generation.”

Ms Twining agreed, arguing agriculture invests less in training and development than many industries, and needed to catch up.

He saw the opportunity for “enormous” growth, telling the theatre: “In science we love change. To be successful, innovation is central.”

For many in the audience, a meat-free future was deemed unpalatable, with one member passionately insisting “planes are worse than cows” when it comes to harmful emissions.

“Scary” change on the way
But change is coming. As debate chairman and CLA member Gary Walters concluded in his closing remarks, it could be “scary” as it will affect livelihoods, although great opportunities will also present themselves for those who look forward, embrace science, technology and training, and strike a balance between environmental and financial sustainability.

“All eyes will be on Brexit over the next few months, but as this debate showed there are wider changes facing farming and the rural economy.

“We’d like to thank the sponsors, speakers, chair and the audience for all contributing to a very interesting and thought-provoking evening.”