Nick Martin’s exhibition ‘Shimmering Musicians’ opens this Friday, 29th September at Quay Arts. All are welcome to the preview event between 6-8pm. 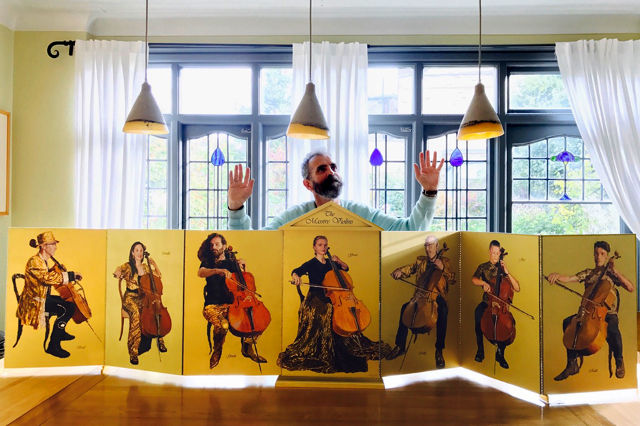 Nick Martin’s exhibition ‘Shimmering Musicians’ opens this Friday, 29th September at Quay Arts. The main work is a seven-part gold leaf folding alter piece featuring Grace Chatto of Clean Bandit fame, in a different guise, as one of the members of The Massive Violins who played at Quay Arts in July.

“Since skating for the Clean Bandit video ‘Dust Clears’ I wanted to paint The Massive Violins, of which Grace is also a member.

“My son is in the band too, which was an added incentive for portraying this exciting group. I’ve been involved in music all my life and it was time to express it in my painting.”

The show portrays 22 different musicians, many known on the Isle of Wight, including the director of Quay Arts, in a print called ‘Paul Armfield on Bass’ and local band, Plastic Mermaids. The images concentrate on the moment of excitement when musicians dazzle the audience both visually and acoustically.

Island Heroes
Nick Martin, who teaches life drawing at Quay Arts, has also recently completed three cut-out figures for the ‘Island Heroes’ project including film director, Anthony Minghella, Inventor of the radio, Guilelmo Marconi and the Garibaldi the general responsible for the Unification of Italy.

The figure was displayed recently on the balcony of the Guildhall (where Garibaldi gave a speech in 1864).

“Coming from a Scottish-Italian background I wanted to celebrate famous Italians who have come to mean something to the Isle of Wight.

“It’s by sheer coincidence that they will be at Quay Arts at the same time as my show.”

Exhibition preview
The figures, alongside 25 other Island Heroes will be on view at Quay Arts from Friday 29th until 3rd November, when they will be auctioned off.

Nick Martin’s exhibition ‘Shimmering Musicians’ starts on Friday and continues until 21st October in the Clayden Gallery at Quay Arts.

Filed under: Island-wide, Isle of Wight Art, Music, What's On