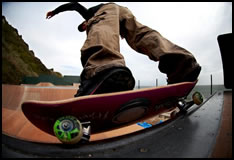 There’s been a lot of really positive moves for the Ventnor Skate Park since the last posting on here, so much so, that we’ve not had time to let you know about it until now!

Following earlier discussions with Val Taylor and Nicky Hargreaves of the Ventnor Community Projects, there was a very productive meeting with Jason Doughty of the council’s Property Services department at the Winter Gardens last Friday 25 April).

We outlined all of the hard work that had been done in just seven days, since the shock of potential loss of the park.

There’s a big thanks also for Matthew Chatfield, head of Countryside, Parks and Beaches for the council over the Island, who has has been helping smooth the way.

Following this, we all headed down to the skate park, so all of the work that had been put into clearing up the site on the night of our emergency meeting back on 15 April (although it feels much longer ago!). Everyone there was pleased with progress, while John C outlined what the further stages of development of the park could be.

We sent a letter to the council’s Property Services outlining what we were planning to do to the Ventnor Skate Park. They quickly acknowledged this saying “This all sounds very good and I have no doubt that the newly formed ‘Ventnor Skate Park Group’ will pull together to make the park a success for Ventnor,” which pleased us hugely (we let them off the ‘newly formed’ bit, given it was formed over a year ago).

Some other great news? Looks like we’re going to be able to sign a license for TWENTY years!

Yesterday we had a fantastic, positive meeting with Eccelstone George who are fully onboard to make Ventnor Skate Park a unique park in the UK, if not Worldwide.

This coming weekend, Scott Wilson (one of first sponsored skater boarders on the Island, by H Street in the early 90’s) will be coming down to cast his now-architect eye over the site.

The Bees are behind us, as are Jackson Analogue and a few other Island bands. They’re completely up for creating a single to raise funds for the skate park (we’re going to need money to keep it going and expand it). So stay tuned.

Still more to do
We’re in the process of sourcing insurance for the skate park which is a condition of us having the license to the land from the council.

There are loads of other bits to sort out too, so don’t expect instant results, but stick with us. If you’re able to help out with a few things, please get in touch.

We’re getting a lot of goodwill from everyone who hears about keeping the Ventnor Skate Park open.

There’s going to be two phases to the work on the site – first, get the areas surrounding the current ramps sorted out, up to the safety standard that the council want.

Once this is done, we’ll get on to the second phase – expanding it to be an urban skate heaven.

Here’s where we need your help. For any of this to work, we need you to come along to give a helping hand when we’re at the construction phase. We’ll let you know when we know about dates.