The Government want Southampton council to reduce air pollution. The council suggests a £100 fee for non-compliant lorries. Red Funnel, taxis and ports are not happy. 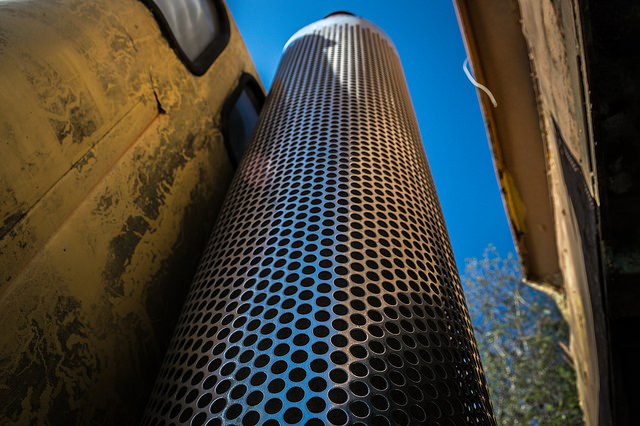 As picked up by OnTheWight over a year ago, Southampton council is being told by the Government to reduce air pollution. There’s a proposal going before the council’s Cabinet tomorrow to charge non-compliant commercial vehicle £100 to enter Clean Air Zone (CAZ). Red Funnel and haulage companies are not happy.

Update: 19 June 2018 07:15 – The Leader of Southampton council, Chris Hammond, has just confirmed on BBC Radio Solent that Private vehicles will NOT be included in the plan to charge vehicles to enter the city’s CAZ, nor will Light goods vehicles. The CAZ covers the roads leading to Red Funnel’s port.

He also said the charge for lorries would be up to £100. The matter will be discussed at SCC Cabinet meeting this afternoon.

Southampton’s port bosses, taxi drivers, and haulage companies are looking to revolt over plans charge up to £100 a day to enter the city.

Southampton City Council want to bill commercial vehicles as soon as they enter the city’s boundaries, if they don’t meet emission criteria.

Trade move elsewhere?
But companies, including the Road Haulage Association, say this could kill the economy, resulting in trade moving elsewhere to avoid the charge.

Itchen MP Royston Smith also claims that the charge would “trash the docks beyond recognition”, putting thousands of jobs at risk.

“It will affect a third of our business if the charge is brought in. It will also hurt both the Isle of Wight’s and the mainland’s economy.”

As reported, Southampton is one of five cities in the UK under pressure from Westminster to improve its air quality by 2020 – or face a massive EU fine.

The city needs to reduce its nitrogen dioxide level to below 40 micrograms per cubic air metre. It is currently 42 micrograms.

The authority also claims that air pollution has the same equivalent impact as passive smoking, affecting the most vulnerable residents, including those with asthma.

But, speaking at the city council’s overview and scrutiny management committee meeting, opposition councillors labelled the plan a “shambles”, port and taxi bosses claiming a zone is not needed, and that levels are reducing at a fast enough rate without it – action has already seen it reduce by six micrograms in the past seven years.

“This shows that there is evidence that the good work already in place is working. Long may it continue.

“Improving air quality is what we all want to do, but we need to make sure there is no unintended consequences to people or businesses.”

“If measures come forward that can achieve the same outcome (as a charging zone), then we would look into them.

“However, we have been told by the government that we must use a method that reaches the result in the quickest possible way – which this does.”

Cllr Hammond added: “It is the right thing to do.”

But the Conservative MP for Itchen, Royston Smith, blasted the Labour council for its “haste” in pushing the act through – something the civic leaders deny.

“We need to think more about the impacts of this charge,” he said.

“The cost on businesses transporting from the docks will be huge. If the goods that are being transported are cheap, then that £100 impacts more than if the items are expensive – this will affect the cost of items in shops.”

“If the European competitors are not doing this, then we are at a disadvantage and companies will look to go to other ports.

“You will be making a decision that will affect thousands of jobs, putting them at risk.”

“We are here to scrutinise the report, but without the data, how can we do this?

Tory councillors are now calling on the council to delay the plans until they can be properly scrutinised.

Consultation would start 21 June
If the proposals are approved, a 12-week consultation will start on 21st June.

However, local businesses have reacted to the plans, with some unhappy saying it will damage their companies.

AFS Haulage: Why no charge for public?
Owner of Horton Heath-based AFS Haulage Andrew Seagreve was one of those, asking why the public weren’t also being charged.

“It’s not fair to put all the blame of emission on the haulage industry. What about cars? If we’ll have to pay we’ll have to charge the clients more.

“We all agree the haulage industry wants to do what it can but give us time to do that not 18 months. The answer is give us more time. They have to be sensible.”

Taxi bosses also came out in disagreement of the plans, saying that the city council’s grant system – which gives drivers incentives to purchase more eco-friendly cars, only offers a limited source of alternative fuel vehicles.

Image: drainrat under CC BY 2.0

newest oldest most voted
electrickery
Not sure why RF is so concerned; whatever So’ton does today Portsmouth will have to do tomorrow. And what are the RoRo’s supposed to do – stop supplying the IoW? Maybe RF are really worried that someone will notice the massive clouds of black smoke (particulates) blown off their ferries on arrival and departure. Or their customers in gas-guzzlers running their engines while waiting to board just… Read more »
Vote Up20-8Vote Down
johnr
If you actually study the map for the proposed CAZ it covers the whole of the City of Southampton including all the dock area and all routes in and out of the area. Interestingly local bus companies have been offered grants to convert their older vehicles, as a haulage company we have looked into this and works out at approx £18,750-00 each vehicle, the same as it… Read more »
Vote Up13-2Vote Down
tr2015

sometimes you do wonder at the sanity of our elected representatives.

an alternative would be to erect gates at all city entrances, and to lock them shut. That would ‘reach the emissions target in the quickest way possible!

Vote Up11-6Vote Down
wellsm
This seems to me to be a perverse policy. Charging hauliers such a large amount per trip will surely force up the cost of the goods they are transporting. Everyone recognises the need to reduce air pollution but it cannot be done instantaneously unless hauliers were to convert existing engines to the new standards. Below johnr states that the conversion cost is around £19k per vehicle, I… Read more »
Vote Up6-1Vote Down
newman

Good grief, are Soton council mad? Are they really going to let a few stiffs stand in the way of hauliers’ profits?