This latest news ties in with the introduction of a Clean Air Zone charge in Southampton, as reported by OnTheWight last year. 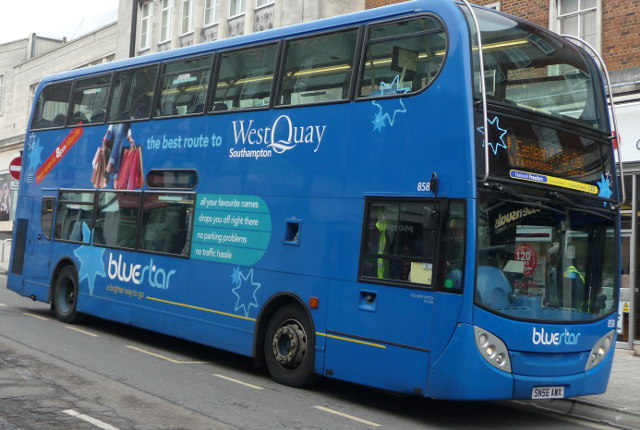 Many Islanders commute daily to Southampton, so this latest news should be of interest to some of you and ties in with the introduction of a Clean Air Zone charge in Southampton reported by OnTheWight last year. Ed

Civic chiefs in Southampton have accepted a £2.67 million grant that will be used to tackle pollution in the city.

The cash, from the government’s Clean Bus Technology Fund (CBTF), shall go towards fitting buses with Selective Catalytic Reduction Technology that will reduce harmful emissions in Southampton.

The city is one of twenty across the UK that received the money from Westminster to address this issue from a total of £40m national funding. The aim is that older buses will, as a result of the changes, have lower emissions, and will take place prior to the introduction of the Southampton Clean Air Zone.

“They will be the cleanest diesel buses that can possibly be achieved,” declared council leader Chris Hammond.

145 buses to be retrofitted
The four city bus operators – First Bus, Go South Coast, Wheelers, and Xela Bus – will benefit from the funding, and a total of 145 buses will be retrofitted by 2019.

The bus companies have also agreed to provide match funding over the next two years of £815,680.

“This funding is a welcome boost for Southampton.”

“This is a really positive step forward as part of the Labour administration’s ambitious Clean Air Strategy.

“Bus use is increasing in the city, and we need the impact of those buses to have a minimal impact on the air we all breathe. This is particularly good news for busy routes across the city’s road network.”

Commercial vehicles, including buses and taxis, which don’t meet pollution standards will be charged to enter the city centre.

Speaking when the funding was originally announced in April, Cllr Hammond said:

“It will contribute towards improved air quality on congested road corridors in the city.”

I hear all about electric vehicles but how long does it take to charge them up? Will there be long queues at charging stations? How much does it cost in comparison with petrol? I am sure that many people do not know.

Sticking plaster. For the same cash they could convert them to gas (single-deckers, anyway). This is yet another sop to the motor lobby, the same who greedily swallowed up £5K per electric vehicle instead of knocking it off their excessive price which was the idiot government’s naive intention.

Vote Up2-4Vote Down
greatergood
Nice one, gas is much better isn’t it, much more sustainable and clean? (shakes head in total disbelief at certain injudicious people) Can’t wait until diesel, petrol and other pollutants are no longer used for transport. My bet is on electric buses, but not powered by conventionally generated electric but by way of hydrogen fuel cells! Or maybe maglev trams? Maybe the next step for now will… Read more »
Vote Up0-1Vote Down
electrickery

Injudicious? I wonder what word you meant to use.
Gas is better than diesel in several respects of which you will be well aware. I agree that electric propulsion would be far better still, but the current fleet of buses is not suitable for adaptation. So, being judicious and starting from where we are, I think a more sustainable and practical alternative is gas. See?

I meant to use exactly that word.
Gas would be slightly better than traditional vehicle fuels dependant on the type of gas used (natural or synthetic?)
But gas still creates emissions!
Starting from where YOU are is still backward thinking (no surprise there then!)
Your ideas are just as much of a sticking plaster approach as you stated originally, combustion engines are bad for our environment end of!
Now do you see?