Well done to Thomas for his superb performance in the Special Olympics GB National Games. 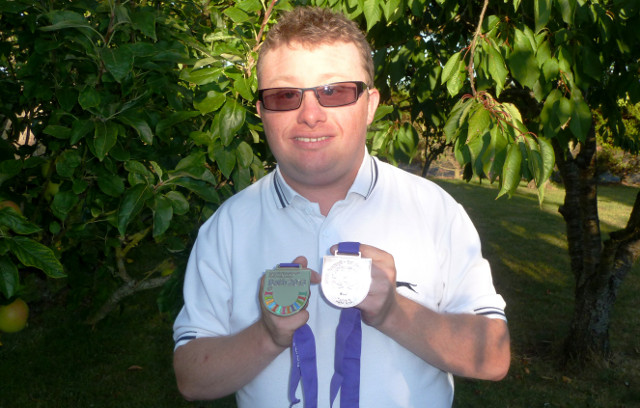 Many thanks to Polly for sharing the great news with OnTheWight readers. Ed

Thomas Philipson, a 32 year old man from Ningwood, was proud to be selected to compete in the Special Olympics GB National Games, hosted by the City of Bath for 2013.

Trains in Newport
Thomas trains weekly with the Isle of Wight division of the Special Olympics Table Tennis team, based in Newport.

He was entered to compete in the men’s singles and doubles, as part of the Southern Region team, with his table tennis partner John Baker.

Every four years
The Special Olympics GB National Games are held every four years. Teams attend from England, Scotland and Wales to take part in a range of disciplines from athletics to table tennis and aquatics. Over 3 days in August, 1700 athletes competed in 12 different sports – making this the largest sporting event for athletes with intellectual disabilities.

A huge congratulations to Thomas for this achievement; he was cheered on by a proud team and delighted friends and family.

Gold medal in men’s doubles
Thomas partnered up with John Baker in the men’s doubles, playing together for the first time competitively. After a close competition, nail-biting tension was rewarded with exuberant celebrations by spectators and opponents alike, when they secured first place with 6 points and a well-deserved gold medal.

Thanks to all supporters
Thanks go to all sponsors and supporters who enabled this event to take place. An even bigger thanks go to the amazing volunteers who worked tirelessly to make the Games a fun and memorable event for all.

Without the support of the volunteers, athletes like Thomas, would not have this life-enriching opportunity that so clearly benefits their lives.

Throughout the games everyone – from spectators to athletes – had one thing in common: one BIG smile.