Did you sign the petition about major roadworks at St Mary’s Roundabout? It’s going to be debated in council chamber this week 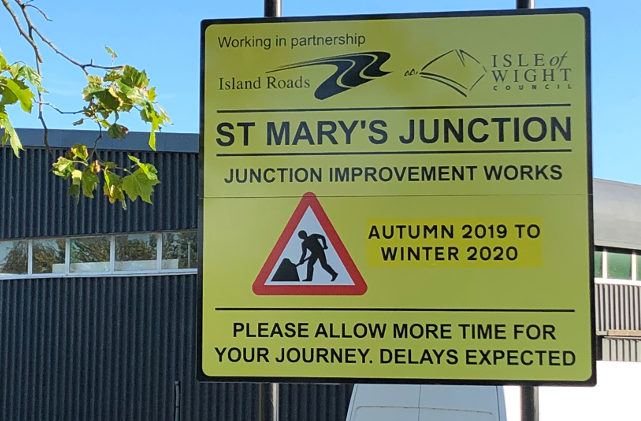 An online petition that was launched in September ahead of 15 months of roadworks at St Mary’s Roundabout will be presented to the Isle of Wight council’s full council meeting on Wednesday evening.

Started by Michael Smith, the online petition, which has attracted over 3,000 signatures, intends to send a “clear sign” to the Isle of Wight council that, “it’s the wrong scheme, at the wrong time”.

“That the council resolves to recognise the strength of opinion in the petition and commits to a more open, transparent and long-term approach to engaging with Islanders before major decisions are made.”

Mr Smith will have five minutes to present the petition to the council, with 15 minutes of debate allowed by members.

The leader of the council, Dave Stewart, will have two minutes to sum up and the petition will then be voted upon.

Newport voters, take time to remember this is a 100% Conservative, expensive, poorly thought through strangely opaque muddle. Think about who you vote for. Actions and ability speak louder than political colour in local elections. Vote for the good of the island, not for loyalty to a flag, especially a ragged one. Change can be very rewarding and uplifting.

As with the previous meeting referring to the petition Cllr Stewart will sum it up in very few words, ‘It was a cabinet decision and it is happening no matter what the outcome of the meeting is’.

Democracy in action with the Conservative. Just what the island votes for!

Democracy is a joke. These muppets are supposed to represent the people, get rid of this Tory Leader and his puppets

Vote Up3-1Vote Down
Chiverton Paul
Cllr Stewart’s ego would never allow him to admit the council was wrong. He needs to fall on his sword on this one. Not bluster through in the face of overwhelming resident opinion. It’s about time there was a central gov investigation into this council, specifically : The formulation of the floating bridge contract and the continuing waste of public money, no conclusion as to who is… Read more »
Vote Up32-1Vote Down
Colin
Unfortunately too late for St. Mary’s roundabout. All the IWC do is launch banal on-line consultations because they are legally obliged to do so. The IWC has no idea how the new St Mary’s junction will work. I attended the public meeting called by the IWC after the project had started at Medina theatre and asked that question and all the IWC rely on is “expert opinion”… Read more »
Vote Up29-1Vote Down
johnr

100% support that. It is a mind numbingly simple solution.

we the great unwashed are missing the point that IR have conceived this wonderful scheme and the IWC have no say in the matter the PFI stand for Private Finance Initiative, meaning get a good idea, apply for government funding and make a profit that is PFI, nothing to do with, do we the unwashed need it

Anybody know the outcome of this meeting? not that it will change anything.

We weren’t able to attend and the Local Democracy Reporter has not filed any posts about it.