Coastal specialists describe the idea to OnTheWight as “Barking mad”. 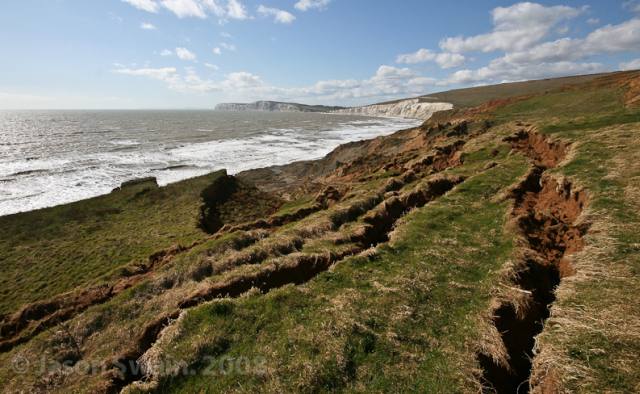 Plans are afoot by Director of Economy and Environment, Stuart Love, to disband the world-renowned Coastal Management Team at the Isle of Wight council.

A document, penned by Mr Love, has been leaked to OnTheWight which sets out the plans.

Only one person for whole coastline
The break up of the highly qualified and respected team is just one part of a wider restructuring of the Economy and Environment Directorate by Mr Love – who is heavily tipped to be given the top job at the council after Steve Beynon leaves – and would see the post of Principal Coastal Engineer ‘deleted’ under the restructure.

If completed, it would leave just one person responsible for the whole of the Island’s coastline – which also happens to be the longest of any public authority in England.

OnTheWight has spoken to people who have expertise in this area and they question the wisdom of this at a time when changes in the weather, such as this being the wettest year on record in England, bringing cliff falls like has been seen at Totland.

With the ‘deletion’ of the role of the team’s head, there will be a loss of years worth of knowledge about the Isle of Wight coastline.

Cllr Welsford: “This is madness”
Cllr Chris Welsford, who represents the IW council at SCOPAC (Standing Conference on Problems Associated with the Coastline), told OnTheWight, “If this is true, if we are abandon our coastal protection team, then this is madness”, he added, “This decision shouldn’t be made by council Officers, it should come before Full Council.”

Test from the Delegated Decision Report

The following changes are proposed:

The Geotechnical Engineer post is transferred to the PFI service provider as the role is largely related to monitoring ground movement and water levels which will be the responsibility of the PFI provider in relation to the public highway.

The responsibility for managing harbours to be transferred to the Reactions, Leisure and Public Spaces Team which already manages Ryde Harbour. This will mean this this Team will also be responsible for Newport Harbour and Ventnor Haven. The Newport Harbour Master will report to the Leisure Facilities Manager.

I am no expert, but does this decision not have to come from full council and after consultation.

Stuart Love you have absolutely no power to carry this out.

Resign Now and do yourself a favour as it will be embarrassing when you are disposed of in the very same way. What Goes Around Comes Around.

Vote Up00Vote Down
sam salt
It strikes me from reading the Delegated Decision Report that this has been writte by someone without a clear understanding of many of the roles they are proposing to change. Black Dog is right this proposal is so far reaching (and dangerous) in my opinion and should go out to consultation with interested parties and the town and parish councils. Replies to the consultaion should then be… Read more »
Vote Up00Vote Down
Vanessa Churchman
I did not know anything about this, it did not come to Full Council and I have not seen any consultation documents. Back in 2006 we hosted a world conference on the effects of climate change. I think I am correct in saying that well over 100 delegates from round the world attended. They were all experts and it was fascinating to listen to facts, figures and… Read more »
Vote Up00Vote Down
phil jordan
@Vanessa Churchman: Thanks Vanessa…… how unusual is it for you as a Councillor to not be advised of these sorts of major changes on the Island? I’m beginning to think a 1 megaton nuclear bomb set off over Newport would not do as much damage to the infrastructure of the Island as this elected ruling group are currently doing! As you rightly suggest….let’s get out on May… Read more »
Vote Up00Vote Down
Robert Jones
Just when you think IWC couldn’t get any stupider or more incompetent – they do! Full of surprises….. Presumably Mr Love is being heavily pressurized to find savings – however, there are some savings which strongly suggest we really don’t need a council at all if they’re carried out: to transfer the Engineer’s role to the PFI service provider as the role is “largely related to monitoring… Read more »
Vote Up00Vote Down
mosey

I think you’ll find that other parts of the wider restructuring are also barking mad. But I do believe that after the consultation period it all has to go to committee for approval. Whether any notice is taken of staff concerns is another matter.

Vote Up00Vote Down
Cynic
Interesting……! does that mean Island Roads (VINCI Concessions, Meridiam Infrastructure and Ringway)will in future be responsible for protecting IW coastline from erosion and subsidence? If so, no doubt insurance companies will be suing them for damages to their clients’ properties that have suffered from subsidence and similar earth and flood movements that Island Roads have failed to prevent ? Could be an expensive decision for Island Roads… Read more »
Vote Up00Vote Down
tryme

Those well known protectors of the environment, Island Roads. A slab of hot tarmac around the coastline should fix the problem of erosion, & if more roadspace is made in the process, so much the better (for their investors).

Vote Up00Vote Down
Sciolist
Unfortunately Mr Love and Mr Pugh appear to be friends. To protect the interest of Islander’s I believe they should have a master – servant relationship. If by some miracle Pugh clings to office, his Love will be our next Head of paid service – Chief Exectutive by another name. Yes friends, the £200,000 a year post is already filled, the deal is done. All Stuart needs… Read more »
Vote Up00Vote Down
BB

Unfortunately Mr Love is Mr Brown’s buddy and not Mr Pugh’s! That was the late Steve’s role – remember him?
Any way County Hall is awash with pending rumours that Mr Love still has some outstanding business to deal with and Mr Browns absence from his jolly delegated decision circus today is quite ominous. OTW and CP are keen to break this.

The rise and fall of the empire? I do hope so….

Not sure about Empires more like down right scull duggery in the names of public administration and you scratch my back and I’ll scratch yours. Mason Watch we need your scrutiny and insight as this is getting very murky?

Vote Up00Vote Down
Billy Builder
The problem here is that we have a person in Stuart Love who has absolutely no capability to do the job he is employed to do. That is, Stuart Love is a data comms technician not an engineer or planner, and as such is not qualified to make any decisions related to coastal protection, or management. The council need experts to run their services, not just people… Read more »
Vote Up00Vote Down
WH
I agree Billy but members will vote such changes at tonight’s full council meeting. Stuart Love and CX position, Hampshire County Council takeover, Coastal Management and other ‘barking mad’ options will be given lip service, etc. Members have the chance, and for some of them the last chance, to do the decent and correct thing and allow these major decisions to the new administration post May. It… Read more »
Vote Up00Vote Down
mosey

Unfortunately the current set-up does not value experience, knowledge & qualifications. The thinking is that everything is ‘just procedures’ so anyone can do anything.