Ventnor Fringe Festival: The Picture House: Not to Be Missed

Make it a date

We’re just back from The Picture House, which is running all week as part of the Ventnor Fringe Festival. 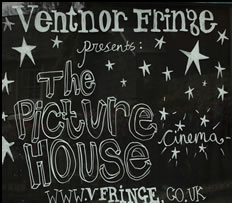 What a transformation the venue has been through. Kitted out with proper cinema seats (from the old Bijou Cinema that used to be in Ventnor) and enough room for about 20 people, the Picture House will be home to screenings and experimental exploration throughout the week.

From 11am-noon each day the IW Film Network will be screening selection of locally made films.

Between noon and 1pm films by Felicity Fair Thompson and Tim Hope will be playing.

The Picture House is at 97 High Street, Ventnor (just down from the former Ventnor Brewery) and opens each day from 11am.

If you’re into independent films (or even if you’re not), it’s well worth the visit.

Many thanks to Andrew Wilks from the IW Film Network for sending through pics from the first day.

Image: © Used with the kind permission of Andrew Wilks

Filed under: Film, Isle of Wight News, Ventnor, What's On