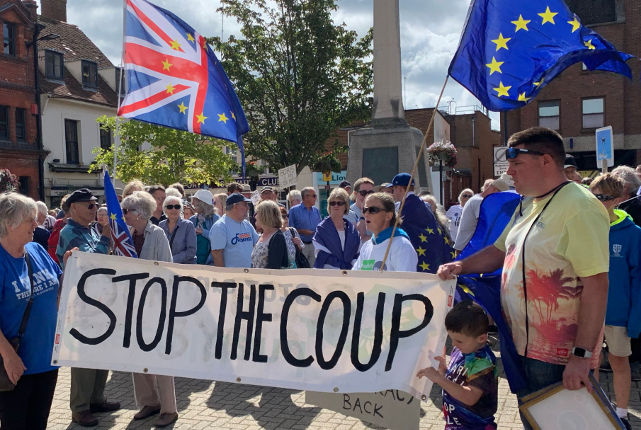 Sent on behalf of “non-party political groups who are concerned about Defending Democracy”. Ed

The Prime Minister, Boris Johnson, is still clinging onto power – even though he now leads a government without a majority in Parliament. He still plans to prologue Parliament from next week for five critical weeks before the October 31st deadline.

Thousands have gathered in protest outside Downing Street and in city squares across the country in the last week.

Join in solidarity this Saturday
This Saturday, 7th September, Isle of Wight residents are invited again to join in solidarity with our friends on the mainland and take a stand against the arbitrary actions of a Prime Minister and government who are still yet to win a election by all the people or the confidence of the House.

Over 200 took to the streets of Newport last weekend. All are welcome to assemble again from 11am in St Thomas’s Square as a demonstration to defend Parliament’s sovereign role within our democracy.

“This government has not shown any movement in their belief that they can suspend Parliament and rule without accountability until the middle of October.

“We must show Westminster that the People demand that our MPs don’t get to walk away. They must keep working hard in Westminster to find a solution to our national crisis – right up until the October 31st deadline.

Where and when
Meet at St Thomas’s Square, Newport 11am-midday.

By Islanders for Europe

newest oldest most voted
lionel
Normally Parliament goes into Recess when the Party Conference season is due. The House is not sitting but all other business, select committees etc , carries on as normal, in fact many MPs do not attend Conference but get on with constituency business and the myriad other tasks of their job. When Parliament is Prorogued, the whole shooting match is closed down, in this case five weeks.… Read more »
Vote Up11-4Vote Down
Geoff Brodie

The Party Conferences have still not been cancelled so 3 weeks will still be lost no matter what. Hypocrisy by Remainers.

Vote Up20-15Vote Down
Geoff Brodie
Having witnessed 125 at their protest last week, though they claimed ‘more than 200’, I went along again this morning. There were about 35-40 there and I have photos to prove it. It was essentially the remnants of the local Green party and Ms Lowthion’s weekly speech was clearly more about Remaining rather than the so-called ‘coup’. Prorogation for what will probably be only 4 days longer… Read more »
Vote Up6-2Vote Down
Geoff Brodie

And another week of the ‘protest’ saw a motley crew of about 20. At this rate Ms Lowthion will be there on her own.

This demo is now pointless as the High Court has just today ruled the prorogation of Parliament is lawful. We have prorogation every year normally. These last two years have been abnormal as Parliament has sat for 400 days and there’s been no new legislation for them to discuss.

Vote Up3-3Vote Down
Steve Goodman
Adding a little more accuracy: As routinely reported now, nothing is normal concerning this shameful s**tstorm. Three threes follow; the three judges today gave no reason for their ruling, and said that the case merits by-passing the usual appeal procedure and should go directly to the Supreme Court, where it is expected to be dealt over three days starting on 17 September, in combination with the two… Read more »
Vote Up2-7Vote Down