Those in attendance have pledged to return next week if the Government fails to step down if a vote of No Confidence is passed, or they ignore legislation decided upon by Parliament. 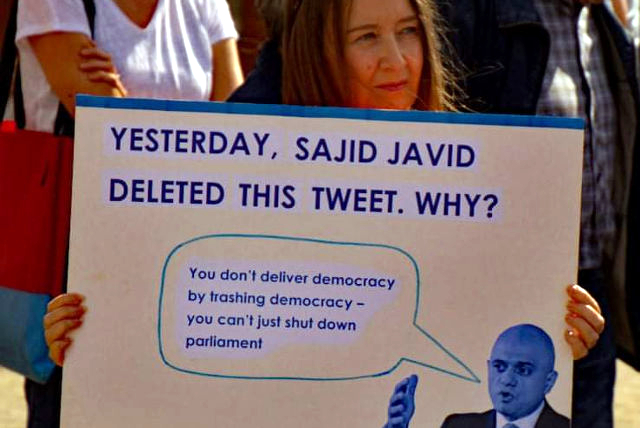 Vix shares this latest report on behalf of Islanders for Europe. Ed

Islanders took to the streets of Newport at the weekend, in a determined reaction to the Prime Minister’s arbitrary decision to suspend Parliament for an unprecedented five weeks before the planned Brexit on 31st October.

A crowd of over 200 residents – young and old, ‘leavers’ and ‘remainers’ – chanted ‘Stop The Coup’, sang songs about ‘Standing Together keeps us Strong’ and peacefully marched across the town.

Peaceful gathering
Many speakers stepped forward to address the crowd, covering topics including citizenship, finances and concerns about dictatorial behaviour.

A handful of people wearing Brexit Party badges heckled from the side, but the gathering remained peaceful.

Those in attendance included a wide spectrum of Islanders: a few were members of Isle of Wight political parties, some EU citizens and even a couple on holiday from Oxford.

“We just felt strongly that we needed to join a protest whilst away from home.”

Lowthion: An attack on Parliament is an attack on us
Vix Lowthion, IW Green Party spokesperson who had helped to organise the event with 48 hours notice, said

“In our country, those in Government get their power from the support of the people. The shutting down of Parliament is the seizing of power away from the people – and this is not acceptable.

“Our Prime Minister is afraid of his own Parliament! We stand together in this square to demonstrate to the Government that we are prepared to act to defend our democracy: an attack on Parliament is an attack on us, the people.”

Those in attendance have pledged to return next week if the government fails to step down if a vote of No Confidence is passed, or they ignore legislation decided upon by Parliament.

newest oldest most voted
confidential
As published by OTW A total of 79,430 residents of the Isle of Wight placed their voting slips in the ballot boxes or took advantage of postal voting in the EU Referendum. With a voting population of 109,844 that is a 72.3% turnout. The results Counting officer, Chris Mathews, has now confirmed the final results as follows: Remain : 30,207 Leave : 49,173 Spoiled / Void /… Read more »
Vote Up30-16Vote Down
ohnhai
What does any of that have to with the price of eggs? This wasn’t about the scourge of Brexit, leave, remain or any of that fetid mire. This was entirely about a PM with zero mandate from the people going out of his way to hinder and prevent the House from doing its constitutional demanded job. Even more than the prorogue, it’s the fact he has also… Read more »
Vote Up13-10Vote Down
Colin
You have to laugh really. The remainers have done everything possible to thwart the 52% who voted to leave over the last few months. Now they are having a whinge because at last the leavers have a leader who is determined to leave. The best thing though, is that we live in a free country where we are allowed to protest about anything with all sides able… Read more »
Vote Up23-19Vote Down
Geoff Brodie
I counted about 125 at the ‘Islanders for Europe’ protest at 11.45am. Even if we accept their inflated figure of 200 that is still only 0.0018% of registered Island voters. Most then hung around when the 15-20 local Labour people turned up for their separate 12 noon protest. Speeches could not be heard and most passers by and people I know were quite contemptuous of the continuing… Read more »
Vote Up22-20Vote Down
Geoff Brodie

Vote Up10-17Vote Down
Benji Smith
Labour supporters were there throughout, they just didn’t follow the exclusively-Remain delegation off to county hall. I don’t see why parties should have to cancel conferences that were planned for months just because your seemingly preferred Prime Minister decided to eat up what little time we have left before a Brexit not even the Isle of Wight would’ve voted for. If you were actually in a party,… Read more »
Vote Up8-14Vote Down
ohnhai

And people didn’t ‘hang round’ for the labour protest..

After a while Mr Critchley, obviously fed up of lurking at the back of the I4E protest finally acquiesced and joined in with our protest. Albeit glibly and patronisingly giving a historically errant sermon in which he quoted Cromwell of all people.

Yes… ambarrassing in the extreme that he claimed Churchill as a hero and then to give a speech that had nothing to do with the protest. Apart from him, the speakers were ordinary folk just wanting to put their views forward and it was refreshing.

Embarrassing that I can’t spell embarrassing. ;-)

Vote Up00Vote Down
chrisev
Disappointing Geoff. I was there (I didn’t see you), and there were far more than 125 people there. It is strange though that both you and the Labour member who spoke seemed to totally misunderstand the purpose of the protest… Which had nothing to do with Brexit. It’s the sort of thing that in days gone by you would have endorsed and spoke at. It all smacks… Read more »
Vote Up8-6Vote Down