The details of the bus services being provided tomorrow.

Some of the Southern Vectis bus drivers are planning to take strike action tomorrow over a pay dispute, but the Island’s bus company is saying that “Most buses will be running during the strike on Thursday 3rd September.” 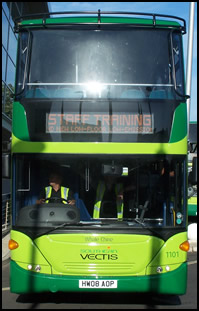 Four bus routes (1, 4, 5, 9) are marked as “Shuttle Service”, which we’re told means that they’ll be running them on a ‘best efforts’ basis, so the exact timetable will not be adhered to, meaning there may be some delay.

To counter the strike action, we understand that bus drivers from the mainland will be brought over and that some (qualified) officer managers may also be driving buses, which may have lead to Southern Vectis saying …

While we are currently expecting to operate all the above, we are expecting operating conditions to be difficult, and a proportion of our staff are not as familiar as usual with routes and stops. We may therefore suffer from delays and disruption.

School Buses / Coaches
Lots of schools will having their first day tomorrow, so many parents will be pleased to hear that the school buses will be operating normally.

WightBus, run by the Isle of Wight Council, will be running a normal service.

Fixed pricing
Tomorrow there will be fixed pricing of £2.50 per bus journey.

If you found this article interesting or of value, please think about supporting the work of VentnorBlog.

newest oldest most voted
driver57
I’m sure these SV drivers believe in their cause – but these days striking should be a last resort. The bus company seem to be bringing in drivers from the mainland so what will be achieved. A loss of pay? The fact is we are in a terrible economic situation, these drivers just look daft, it’s just the wrong time to be bleating about pay. As always… Read more »
Vote Up00Vote Down
Sailor Sam
What some people dont realize is that parent company Go-Ahead has recently anounced signifitant proffits. SV themselves have also been reported as boasting sigifitant growth in passenger numbers over the last 2 years. Obviously this is due to the inroduction of conessionary travel for the over 60’s and disabled. But now SV are saying that the reason they are un-able to offer a pay award this year… Read more »
Vote Up00Vote Down
Harold
Every single figure you quote is wrong. Every statement you make is untrue. You continually pedal this misinformation on a variety of forums for the Island. By all means debate these issues, but make it an informed debate. If you want to make these statements why don’t you put them all to Southern Vectis first and get their response. Why are you so keen for people to… Read more »
Vote Up00Vote Down
Sailor Sam

Ok Harold, if every figure is wrong perhaps you could provide the ‘true’ figures? Most of the information has been published in the media over the last couple of years and some of us have good memories.

Vote Up00Vote Down
Harold
First Year Flat Rate Â£1.50 something Then 48% but raised (not cut) to 49% at an appeal Now the Council can’t make their mind up – latest version is just over 30%. It’s about 85p at that rate In winter OAP are nearly half the passengers There may be lots, but at 30% they need to carry three times as many to get the same fares as… Read more »
Vote Up00Vote Down
Sailor Sam

it says shuttle buses are these the normal green ones or white buses?

Wouldn’t be anything to do with Bob Crow by any chance??!!

We’d all love more pay, but seems to me that with so many folk seeking jobs these days a strike is not going to gain much public sympathy.

Let’s hope the island doesn’t get to the same state he stirs up with London Transport – but hey I’m sure he’s not bothered with his six figure salary!

Vote Up00Vote Down
mad mick
I sure Bob Crow would love to have a six figure salary as would most of working people as always people like you windy you are totally a misinformed reactionary. The bus company’s are making vast profits and are using the current recession to try and squeeze the workers pay to the lowest level to increase their dividends to shareholders who have no interest in you or… Read more »
Vote Up00Vote Down
Bus Driver

You’re having a laugh. Don’t you know how much Bob Crow gets for being the General Secretary of the RMT union – all paid for by the weekly subscriptions of bus drivers train drivers and deck hands at sea.

This bloke and his cronies make Thatcher look like Mother Theresa.

Someone go and tell those Southern Vectis drivers who are paying into his pot each week!

Vote Up00Vote Down
Mad Mick
Another know nothing bunch of babble from a know nothing! Do you actually know what the drivers have been offered this year? I expect not! You miss the point completely this is not about what Bob Crow earns its about what the drivers earn and how much they have been offered. Of course that would be of little interest to somebody like you who is not really… Read more »
Vote Up00Vote Down
cheeky minx

Vote Up00Vote Down
adrian nicholas
whilst expressing sympathy for the staff over pay dispute- to win a strike- you have to win over local people and that means users- whilst it now seems clear that public services will not be hit- the threatned strike as portrayed by the media(the truth may possibly be in actuality somewhat different or disorted possibly?)seems to weigh against the actual dispute in favour of seeming affecting most… Read more »
Vote Up00Vote Down
Adam

Perhaps the fixed prices being used will catch on! Fixed pricing is definately easier for drivers, which is why it is being used for the strike, and should be cheaper for most customers.

Vote Up00Vote Down
Clarkee
IF YOU HAVE A HALF PRICE JOB HUNTER CARD YOU STILL PAY Â£2.50 PER JOURNEY. (NORMAL PRICE Â£1.50 OR Â£2 FOR A FOLLOW ON) SO IT’S THE PEOPLE WHO ARE NOT LUCKY ENOUGH TO HAVE A JOB IN THE FIRST PLACE SUFFERING THE MOST AND JUST TO TOP IT OFF THEY HAVE TO STAND UP AND GIVE THEIR SEAT TO AN ELDERLY PERSON WHO HAS JUST COME… Read more »
Vote Up00Vote Down
Meursault

Striking over pay in the middle of a recession doesn’t seem quite right somehow. I guess there are many would simply be happy to have a job.

Vote Up00Vote Down
driver57
The RMT? Bob Crow is the new Arthur Scargill. ‘My members’ Blah Blah. He did this at Vestas, when no-one working there WAS his member. His socialist workers diatribe is pure last century communism. As always the misinformed drivers are being hoodwinked by a union with its own agenda. SV say they have a two year pay deal that gave them a 13% rise. I believe them.… Read more »
Vote Up00Vote Down
Sailor Sam
The 2 year pay deal of 13% has expired so a pay award is due for this year which has’nt happened. Dispite on going negotiations since earlier in the year, SV failed to make an offer blaming the free concessionary scheme as the reason. At the end of the day, the drivers need a rise to keep pace with inflation as they are still behind their mainland… Read more »
Vote Up00Vote Down
Harold
Inflation…it was a minus figure when the pay award due. Overtime Ban, Work to Rule, Strike…you don’t get it. These guys and girls are working because they want to get on with their lives and earn their wages. The trade union doesn’t represent the majority of them. Only 24% of their staff voted to strike. Many more of them would be at work if they didn’t feel… Read more »
Vote Up00Vote Down
Sailor Sam
The figures you quoted earlier ar’nt a million miles away from my original post which you rubbished. I note you did’nt address the difference in drivers pay compared to mainland drivers with actual numbers. My guess is that you actually work at Southern Vectis in a management capacity so no wonder you seem to know in detail exactly what is going on. Surely ‘flying’ drivers in from… Read more »
Vote Up00Vote Down
John
Speaking from the viewpoint of a mainland “Scab” driver of last years Poole strike and the current dispute I think Southern Vectis drivers have got a real cushy number. Driving brand new buses on pleasant country roads, polite and friendly passengers,no real traffic congestion,not having to drive on the same roads as drug and alcohol crazed immigrants. All for an odd pound or two less per hour.… Read more »
Vote Up00Vote Down
seb

bus company bringing in drivers from the mainland?

maybe they could ship in some workers from poland who won’t realise they’re being asked to act as SCABS.

FYI – It’s not really a picket-line, more of a presence of pickets. All very well humoured.

Well in Orgreave the police started it, as the BBC was forced to admit, many years after “accidentally editing the footage to suggest the opposite”. An Orgreave is the last thing I’d wish upon any striking workers.

Vote Up00Vote Down
penny
We might have been SCABS in your eyes, but in this day and age we know that when there are bills to be paid and morgages etc and are been offered a reasonable wage to come and do this work then to say no would be foolish, as it has already been mentioned a few times this is not the 1970 s anymore but an era where… Read more »
Vote Up00Vote Down
driver57

Yeah, let’s compare this silly action with the miners strike. ‘WE WON’T STAND BY AND WATCH THE DESTRUCTION OF OUR JOBS AND COMMUNITIES’ Said Arthur. ‘Lions lead by donkeys’ they said at the time, nothing has changed with some unions. Do me a favour, this is 2009.

Vote Up00Vote Down
d.z. bodenberg
They didn’t stand-by. They fought – and in the end, lost. But you can’t blame them for trying. And you can’t blame the likes of NUM members (as any union is a lot more than its leader) for wanting to prevent the outcome they had a few years later, and still today: destroyed communities, destroyed families, ex-pit villaged decimated by hard drugs, generations of destroyed lives. This… Read more »
Vote Up00Vote Down
DOD

I don’t know enough about the busmen’s case to stick my nose in.
But I am fascinated by the difference in outsider response to their action compared to that shown to the Vesta employees.
Is it because a dispute over wind turbine production doesn’t directly affect us one way or the other: whereas withdrawal of bus services does?

Dod i’m not sure what you are trying to say on this but what I can say is that the Southern Vectis dispute is totally a different situation to Vestas. If you read my earlier post then you may get an idea on the situation.

I’ve not been on a bus on the Island for years..Overpriced, inconvenient & poor service in general.