Transition Island gets to work on County Hall ‘Incredible Edibles’

As thought might be the case, a litter pick was needed before planting could begin for the Incredible Edibles project outside County Hall. 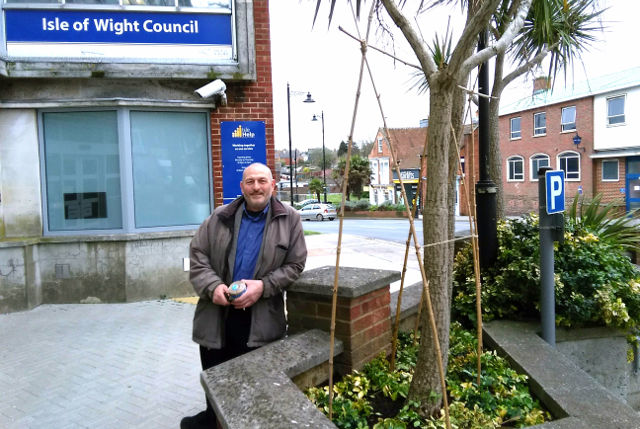 This week Transition Island volunteers, with council permission, used a raised bed outside the main entrance at County Hall to plant a variety of edibles, in the hope that the Incredible Edible idea which has been such a success elsewhere in Britain and abroad will be adopted in all suitable Island public spaces.

Stage one – Litter pick
Our first jobs were the removal of a surprising amount of cans, bottles, and other litter from below and within the existing evergreen shrub (Euonymous?), the removal of a rotting Cordyline stem and a little pruning.

Then we set about transplanting of some bulbs to create more space for the donated food plants and compost. Tomatoes, beans, cucumber, and herbs were introduced.

Murwill: A win-win situation for everyone
Isle of Wight Councillor Michael Murwill who attended the launch, told Isle of Wight Radio,

“We want to spread the word of what we are doing on the Island and the idea came up to have edible produce outside County Hall. I think it is really good.

“Transition Island have done a great job and it is another step forward. We hope other groups [and] Parish and Town Councils take part. It’s a win-win situation for everyone.”