Isle of Wight singer, Trinity Bubbles, has been blown away by the support for her latest video, a cover of the Leonard Cohen song, Hallelujah. It’s had over a million views and is being shared worldwide. 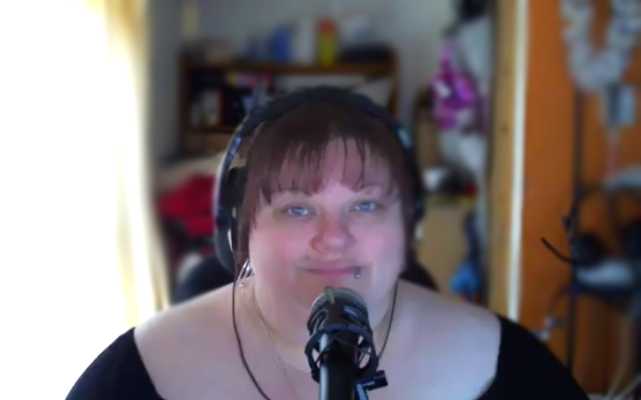 A singer from the Isle of Wight who recorded a video of herself singing a cover of the Leonard Cohen song, Hallelujah, has been stunned by the response.

Trinity’s video has been viewed over one million times since being posted to Facebook on Wednesday last week.

Based in Newport, Trin (as her friends call her) has been singing for many years and posts to her YouTube channel. She even sings in the virtual world, Second Life where she’s won a couple of competitions – SL’s Got Talent and another called Avi Choice Awards.

Heading for Ellen?
This latest video was picked up by someone in the US who felt it deserved to be shown on the Ellen DeGeneres show, so added a hashtag and started sharing.

Massively positive feedback
As you’ll hear from the video below, Trin has a fantastic voice and the 6,500+ comments agree.

Feedback from the post on EllenNation include this from ‘Deltadawn’, who says,

So refreshing to hear such real talent and see that when she sings she sings from the heart and soul. You can feel the emotion in her voice. Beautiful voice and beautiful woman. Can not wait to see her go places.

Facebook restriction
Frustratingly, due to the massive spike in activity on her account, Facebook have put a restriction, meaning that Trin can’t see or reply to any messages, can’t add people or see their friend requests, and worst of all can’t see any comments on her video, or comments on people sharing it or in groups.

In response to the massive interest in her video, Trin replied,

“I am absolutely humbled by the response. And am gobsmacked that I have only had to deal with a very small amount of negative comments, which for the internet, is a miracle.

“For the people who say I am lip syncing, or using autotune, I say, thank you! If you think my singing is good enough that it’s pre-recorded or auto tuned, that is indeed high praise.

“For those of you who have said I need to cover up the shelves behind me, as I said, I never expected this video to be seen by so many people or shared all over the world, and I never thought anything more of it than just a normal person, singing in their own house. I never thought to try and make it look professional, because I am far from that. I do have stuff on the shelves behind me because I live in a very small apartment, but next time I make a video, I will pin a sheet to the ceiling.

“And for those of you commenting on my weight, or my looks, I’m very sorry that you have to go through life with such a small, narrow, judgmental mind and I truly hope nobody ever judges or bullies you the way that you judge and bully other people.

“For all the people saying I should apply for BGT/AGT, The Voice etc, THANK YOU for the lovely compliments. I have auditioned for X Factor, The Voice and BGT in the past and never made it further than the first few rounds of each. I aspire to get on the Ellen show because there I won’t be judged. I won’t be pitted against people who have had more opportunity than I have. People who have supermodel faces, stick figure bodies and an infinite amount more confidence than I do.

“Ellen can help people get stuff done, and that is what I would like.

“So please keep sharing, along with the Hashtag #GetBubblesOnEllen”

Thanks to Leif for the heads-up.

I live in the USA and I am just blown away by this artist. What a beautiful person with an Angelica voice. I just don’t understand how this gem has been kept all the UK for themselves. Why hasn’t she been signed to a music contract. Can hardly wait for when she busts out and hits the charts there and over here.

Vote Up18-11Vote Down
Jeff
In reference to the section of the article headed ‘Facebook restriction’: This is one of many reasons why depending upon corporate controlled & limited sites such as Facebook are a problem. One can be cut off from what may have become activity considered important … and there is little recourse. Facebook, Twitter etc. can and will cut off services for any number of reasons real or imagined.… Read more »
Vote Up6-4Vote Down
minnieb