Tunnel to the Isle of Wight: Proposed entry & exit locations and costs revealed

Campaigners for a fixed link between the Isle of Wight and mainland have revealed the entry and exit points of the proposed ‘Solent Freedom Tunnel’. OnTheWight has the maps and more detail. 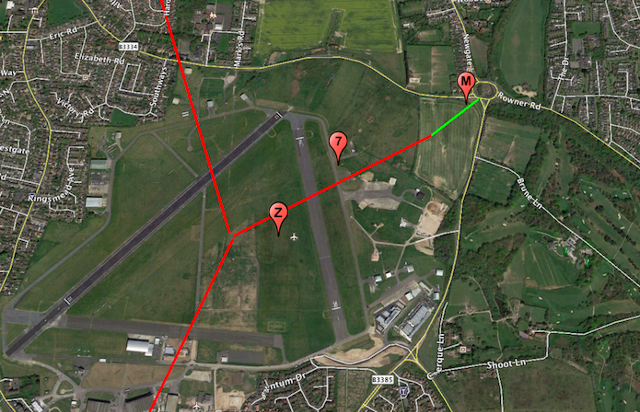 Those behind the campaign for a fixed link tunnel between the Isle of Wight and the mainland have today (Friday) revealed the proposed routes (see maps).

Following discussions with mainland local authorities, the locations of the entry and exit points of the proposed tunnel beneath the Solent have been updated since last year.

Those behind the plans explain that “site visits have concluded the best areas for a ‘three portal’ tunnel scheme, which will create an effective and fast north/south route of vehicular access that at present does not exist in Hampshire”.

Whippingham to M27
The entry and exit locations have been described as:

This axis will extend directly from the M27 East of Whitley, to the coast at Lee-on-the-Solent and then on to Whippingham on the Isle of Wight.

The scheme will incorporate approximately, just 3kms of exposed surface road. All other construction will be subterranean.

Cost of build and use
Carl Feeney of Pro-Link says,

“The proposal for the Northern element of the tunnel, is firmly dependent on the toll income derived from the Solent Freedom Tunnel element.

“Without that substantial SFT toll income, it is presumed the construction costs of the Northern Tunnel to reduce existing land traffic, would make it unviable.

“Both private and public funding is envisaged as the most likely way to pay for the project – two thirds and one third respectively. It is estimated that the Solent crossing element of the project will generate an annual revenue of circa £200million, with a further smaller amount of toll revenue (to be assessed) from the mainland element.”

£3billion estimated build costs
Going on to explain that tolls will raise two thirds of the estimated £3billion build costs, Carl says Pro-Link are confident that,

“More than a £billion of project regional economic regeneration benefits, increase tax revenue and healthcare savings, will be achieved to the UKPLC purse within just a few years of operation.

“Ultimately, this project will pay for itself. At present, the two IOW ferry companies have a yearly revenue of over £110million, operating sporadically just a few hours of the day.”

The routes
The proposed line of route.
Index to markers: More information
Full details and explanation can be found on the Solent Freedom Tunnel Website.

31 Comments on "Tunnel to the Isle of Wight: Proposed entry & exit locations and costs revealed"

This is positive news. I am positive that with the new traffic scheme for St. Mary’s and the current tailbacks along Fairlee road in the rush hour (lol) that we can cause gridlock on the mainland too. You’re not the same bloke that the IWC uses to magic up their fantasy road plans are you?

Fair point though. Similarly, major jam on the mainland could easily gridlock Newport.

@ Dalek. Yes, never thought about that. Maybe they could use a sign the same as Lynbottom tip telling motorists not to queue on the road but to drive on. Haven’t been there recently, is the sign still there?

Vote Up49-14Vote Down
prof
With a £5 toll (same as Severn crossing and Skye bridge) they’re going to need more than a car each second, all day, every day to get a turnover of £200 million. The sky bridge took ten years to collect just £33 million so I suspect either they’ve got their traffic estimates wrong or they’re planning tolls so eye-wateringly high that they make the current options look… Read more »
Vote Up39-7Vote Down
prof

Yawn. More nonsense. This is really getting boring now.

Vote Up37-12Vote Down
greatergood
I really cannot see where the money is coming from to fund this, not many people seem to be committed to investing in it, just to confirm this have a look at their gofundme account for feasibility study, bar the one anonymous donation of £1000 there is nothing of substance being donated. It’s a nice dream to have but it won’t ever amount to any solid plans.… Read more »
Vote Up30-8Vote Down
tapwash
I am the wrong side of 3×20+10 (regrettably),and for as long as I can remember this subject has been discussed and dismissed for the pipe dream that it is. We already have too many people on the Island for it’s lifestyle to be sustainable. This hair brained scheme would just encourage even more incomers and eventually the place would be one vast housing estate without the infrastructure… Read more »
Vote Up31-10Vote Down
Steve Goodman
‘I too am on the wrong side of being a pensioner (un/regrettably is debatable),and for too long the subject of sustainable lifestyles has been underdiscussed and the impossibility of unlimited growth with finite resources not yet universally dismissed as the pipe dream that it is. We already have too many people consuming too much on the Island, the north island, and the rest of our poisoned planet.… Read more »
Vote Up11-7Vote Down
Alternative Perspective

I really don’t know what all the fuss is about, both ferry companies are investing heavily in their infrastructure and improving the experience for passengers, unlike our railways.

Yes the fares are a little steep, but just chill and enjoy the journey, think you are on a mini cruise, there can’t be a more beautiful way to cross the Solent. It is infinitely better than a tunnel.

I agree. Replying to your message from a comfy seat on the Red Falcon. Day trip for me and the wife cost £37.50. Island life eh?

The ferry duopoly could harve their fares and there would still be some who whinge. If you really are worried about Solent travel costs then the best solution is to buy one of the operators, which would be far cheaper, and quicker, than digging a tunnel, then offer reasonable priced fares.

A fast, cheap, fixed link would provide open season for criminals, inviting mainland levels of crime which would completely overwhelm our recently reported 7 police officers on the island..

Yawn – we’ve heard it all before. The criminals are already here.

Look forward to the visit from Feeney to tell me and the wife where our new house is going to be. (New junction at A.)

Can we have a big garden please? And a shed and greenhouse. And ensuite facilities. And a pond.

@ block8. Look on it as a business opportunity. You could collect the tolls or sell strawberries probably from the back door, let alone the gate. You really will be a nimby…

Vote Up10-6Vote Down
terri
Just seen this on a fb page. Don’t worry…this from Fareham Council ““Clearly a great deal of thought has gone into this scheme but there appears to be a £3bn black hole in the funding and no sign of anyone stepping forward to fill it. It appears to propose a new motorway junction with no support from Highways England or thought for the Smart Motorway scheme now… Read more »
Vote Up13-5Vote Down
wellsm

Frankly until someone can show an auditable cost of the project and how that cost will be paid for there is little point in discussing this. Based on the cost of “The Bridge”, the toll could well be the same as a return trip on the ferry so there would be no financial advantage, in which case what is the point?

The main land out fall to a little to far west for me could it be moved near to J4 on the M27 please, this would assist in my forward journey, Thank you.

Vote Up10-8Vote Down
greenhey
This ignores the real problems of such an idea. For a start, a tunnel so long which is driven through would need ventilation shafts. Where would they be? In the middle of the Solent? It also needs refuges and arrangements to deal with traffic incidents. It is NOT analogous to the Channel Tunnel. Drivers there drive on to a railway car to go through. The Channel Tunnel… Read more »
Vote Up23-13Vote Down
Dodo
This is a long overdue project and would improve the quality of many peoples lives. The lack of work and the underfunding of towns on the Island means that many people with low incomes are stranded and their family horizons severely curtailed. Services are limited and businesses seem to constantly fail due to poor incomes and lack of investment. The cost of the ferries and the speed… Read more »
Vote Up5-6Vote Down
peterj
It will never happen in our lifetime. We had enough trouble getting trains that aren’t 80 years old. You can fix or at least vastly improve the ferry problem without the need for any fantasy tunnel. Something else that is overdue: the return of the funds raised for the study and Mr Feeney ‘walking away’ and finally dropping his literal pipe-dream. Both of which he promised repeatedly.… Read more »
Vote Up5-2Vote Down
hialtitude
Carl Feeney polled 2% at the general election on a fixed link ticket, there is no appetite on the Island for a fixed link. A fixed link would bring more cars and pollution to roads already at full capacity, on a sunny bank holiday the Island would become one big traffic jam/parking lot. There is a real danger that the Island would become little more than a… Read more »
Vote Up2-4Vote Down
iowdave

It would be nice to have a choice. Never mind any tolls, motorists could travel when it suits them and not be bound by ferry timetables, delays, lengthy queuing times etc etc. I know which I would choose.
BRING ON THE TUNNEL.

Vote Up9-21Vote Down
urry
Absolute no brainer , I see a few anti ‘Carl Feeney ‘ comments and would rather see some proper arguments. There is ( if you can be bothered to read) an answer to every issue . This is the yr 20 18 !! The technology to do this is happening all around the world and improving people’s lives and future . Isn’t this what life’s about ??… Read more »
Vote Up22-43Vote Down
prof
Not sure I can give an unanswerable reason but I do have serious concerns about the financial viability of the project. Even assuming funding could be obtained in the first place the traffic levels are unlikely to be high enough to repay the costs in a reasonable timescale unless the tolls were very high. Which would, of course, impact the traffic levels. The other thing to bear… Read more »
Vote Up27-9Vote Down
iowdave

Convenience outweighs cost in many cases and this is one of them.

Your comment implies that only Islanders will use the tunnel.

Usually these installations have their own emergency services. Which if course, have to be paid for.