Undercliff Drive – A Case Against

Following David Groococks case for the Undercliff Drive Scheme to go ahead as soon as possible, Barbara Wright from the Undercliff Defence Committee puts forward their case against the proposal, including her notes from the public meeting held Monday 29th January at The Ventnor Botanic Gardens.

This in from Barbara Wright, in her own words. Ed

For the first time, in the history of the Undercliff Drive realignment scheme, a panel with representatives from the major parties concerned, was assembled for a debate that was requested in 2004, 2005 and 2006. Planning permission was granted in February 2005. 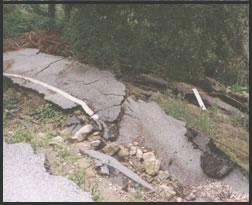 The period for objecting to the Compulsory Purchase Orders ended on 19 January 2007. What was the purpose of holding a meeting at this late stage?

Information for the public about the proposals, has been very sparse, a point made by Susan Scoccia, local councillor. The meeting provided the floor for a very slick, power point presentation, a sales pitch for High Point Rendel. Opinions and queries raised by external consultants, apparently are not being considered. Some valid questions were raised by members of the audience, but were talked over or ignored.

This is one of the largest rotational landslides in North West Europe. Nothing done on the surface will control the very deep movements below. If the Council could permanently stabilise the highway and all the properties here, Natural England would oppose and halt the Scheme. Natural England requires the lower slopes under the engineering works to continue to move in order to maintain their bare earth policy and Sites of Special Scientific Interest; they are scientists, not conservationists.

There is absolutely no doubt that the Undercliff Drive should be kept open for as long as Nature allows.

A mini bus service would help residents who are elderly, disabled or who cannot drive.

Tourism is vital for the economy, but do the tourists visit the Island because of the fast , superb, arterial ‘A’ class road system linking all the major towns, or is the rural character part of the attraction and a key to the Island’s success ? The Undercliff Drive is a part of the Island which people love to visit, they come to see the scenery, the wildlife and to walk through the woods to the sea or along the coastal and cliff footpaths.

Is the intention to fully maximise numbers of visitors and develop Ventnor with new multi – storey flats and hotels on the coast and in the town centre ? Or is the principle to take a long term view of what we are trying to achieve and tie that in with a level of development that is both sensitive and sustainable; more Madeira and less Benidorm?

The Undercliff Drive is open now. If businesses failed, according to reports, due to the temporary closure, when the unforecasted breach at Beauchamp occurred, (2001), what would happen to the few remaining businesses if the scheme were to go ahead and the road were closed for two years ?

‘Do you want the road repaired? ‘ and ‘do you support the proposed scheme?’, are two completely different questions. A fifty year design life of the proposed scheme does not equate to fifty years of stability. Its innovative design requires a huge financial gamble, for the Council and residents.

2 Comments on "Undercliff Drive – A Case Against"