VTC hear that visitor numbers to the Garden are down this year. Also that John Curtis is now considering removing the children’s playground. 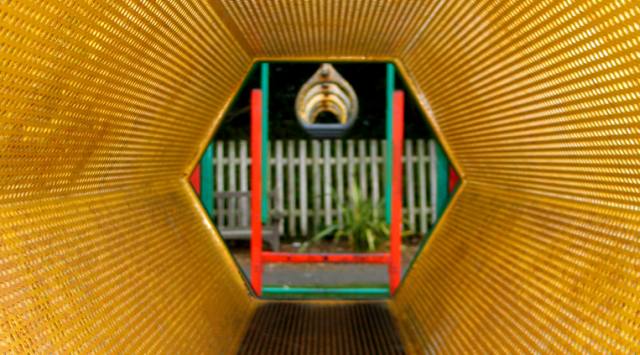 John Curtis, the businessman who heads up the CIC which has a 125 year lease on the Ventnor Botanic Garden revealed at last night’s Ventnor Town Council meeting that he is considering moving the children’s playground out of the Garden.

He said that they “hadn’t got the playground sorted yet”, and was considering ‘donating’ it to Ventnor so it could be rehoused somewhere “to get better use”.

Entry costs a barrier
Many parents, who for years have used the Garden as a park, now see the entry costs as too large a barrier.

Children under six are not charged, but parents must pay £5 each to enter the Garden.

Update: John Curtis has commented below that they have a “Playground Only tariff of £2 as well as Community Mondays and Fridays”.

Playground users not ‘spenders’
During a walk around the Garden earlier in the year, when John Curtis was outlining his proposed future for the Garden to On The Wight, in passing he mentioned he believed residents who have been used to taking their children to the playground in the past are not the sort of people who would then spend money in the cafe.

With the fairly new Seabreeze play park on the Eastern Cliffs, it’s unclear where the playground apparatus from the Botanic Garden could go.

Image: © Used with the kind permission of OblivionHead

For once, I’m speechless!

Vote Up00Vote Down
steve the yak

Perhaps the landlord of The Dairyman’s Daughter would like the playground, ha ha!! (see last years story!)

1 year down only 124 left to go. Trouble is the Community Interest Company don’t appear to have aroused the community’s interest, but their in good company there.

Vote Up00Vote Down
John Curtis
I would to repeat the comments I made to the Ventnor Town Council last night. First, as I said we have a Playground Only tariff of £2 as well as Community Mondays and Fridays. Our interest is making sure the playground is useful to the community. If Ventnor can find a location that is more accessible than the current one, we would be happy to donate our… Read more »
Vote Up00Vote Down
Simon Perry

“Our intent is not to remove the playground, but rather to locate it where it can be most beneficial.”

Ergo remove it, if another location outside the Botanic Garden can be found.

Vote Up00Vote Down
Geoff M
Sorry John,but you are not making sense. Locals and visitors have brought their children and grand children to “our” playground for decades. Many are now unable or not willing to pay for using this facility any more. By all means remove it somewhere, not too far away, in order that it may be enjoyed freely as it should be BUT you knew what you were taking on… Read more »
Vote Up00Vote Down
martin william wareham

John you’ve lost the plot you can’t turn the clock back .On most sunny weekends Blackgang Chine view Point carpark full Botanic gardens empty why because its free you are too expensive.And now Delegated George is going to flog the Viewpoint off to Blackgang chine who will no doubt whack up the charges for the ice creams ect .

Vote Up00Vote Down
Bill E O
“Our interest is making sure the playground is useful to the community. If Ventnor can find a location that is more accessible than the current one, we would be happy to donate our equipment. Our intent is not to remove the playground, but rather to locate it where it can be most beneficial. If there is no better place for it, then it will stay right where… Read more »
Vote Up00Vote Down
Colin

Eh? Do you not read Ventnor Blog. We can’t get Southern Vectis to provide buses for love nor money.

“members of the community growing fresh produce at the garden”

What is it? Allotments, now?

Please come up with something better than this, before the cynics are proved correct.

We all remember playing there as kids, it was almost a tradition.

The council made a big mistake selling VBG off – the £5 entry charge is just too much. I don’t know any Islanders that go to the gardens anymore… hence the drop in visitor numbers!

Vote Up00Vote Down
GJ
In reality, who is about to pay £5 per adult to take their child to play on the swings? I have met a number of residents while out with our dog on the coastal path behind the Botanic Gardens and not one will pay an admission charge. I also note from reading their highly confusing tariff schedule that if you volunteer to help in the garden,they will… Read more »
Vote Up00Vote Down
prewitt parrot

Perhaps if the new venue for the play equipment becomes popular and successful the Council will then sell it off and we can have the Botanic Garden back.

Vote Up00Vote Down
Colin
Is the playground in the way of any future development of the garden as a Botanic garden? No, I think not. Do visitors bring children with them? I think some do. When the kids have got bored of the botanic bit, there is respite in a play area that is set nicely away from the main garden. I understand that VBG needs to attract more people in.… Read more »
Vote Up00Vote Down
Alexandra Peppard

Probably to do your research when the gardens were fully utilised before the sell-off. My daughter and spent hours in the playground, along with all our parent and toddler friends, then always went for lunch or snacks in the cafe. It was almost always packed with children eating cakes and drinking juices during the summer.

“Sell off”…..? Given away is more accurate!
Not only given away but a funding stream for one year (ish) from the Council to boot….

Like so many others I used to take my children there almost daily. In recent years I have taken my Grandchildren there whenever they are on the Island.

We always had a cuppa and a snack and quite often bought something from the shop.

We haven’t been back since the introduction of the entrance fee.

The sums are simple.

If parking used to be £1 per hour and a playground and cafe visit was 1-2 hours and today’s Playground entrance fee is £2 it would seem pricing is the same or very close.

Vote Up00Vote Down
wightywight
@John Curtis: You have an uphill battle john, I’m sure you’re aware of that. It seems to me you are going to have to spend some good while and some good money on repairing Public confidence in this whole affair. As you can read, detect and discern, there IS wide spread disquiet over the whole VBG being *given away* from community ownership into *private* ownership (albeit via… Read more »
Vote Up00Vote Down
wightywight

…you have your answer then John…! put the charge on Parking and make the playground free!

Vote Up00Vote Down
Colin
John, Some of us walked up to the gardens, we either didn’t have or use cars; others parked along the road, hence the facility was always seen as costing nothing although funded through the Council tax. We also used to enjoy a quiet evening visit for a half hour stroll on a pleasant summer evening. Our personal contribution was occasionally through the plant centre which we always… Read more »
Vote Up00Vote Down
oldie
Many locals used to walk along the clfftop to the botanical gardens and didn’t need the car park because £1 an hour was too much to pay, even before the recession. Here are a few ideas for where to put the equipment: 1 The newly built Ventnor primary school, somewhere in their playground; 2 The site of the old skateboard rink along the seafront past the carpark… Read more »
Vote Up00Vote Down
steephilljack
1) The villains in this matter are the County Council who have disposed of the Botanic Garden, like so much else that we pay for in Ventnor, to save money. 2) John Curtis is not like the Hambrough Group, who expect to make loads of money from the Winter Gardens, he is a philanthopist trying to save something precious from the developers. 3) The Botanic Garden now… Read more »
Vote Up00Vote Down
Man at the back

“he is a philanthopist” Sorry, I don’t buy that, he is an investor, eventually expecting to get a return on his money. I think some people need to take their blinkers off.

I don’t think he needs the money, but please do tell us how he’s going to make it. What is his cunning plot do you think ?

@Man at the back:

..Interested to learn (knowing a bit about CIC’s) how one gets an “investment back” when property is held/operated in a CIC….?
Can you be specific please…?

Vote Up00Vote Down
Simba
I’ve been taking my little boy to VB playground FOR FREE, for years- so why should people now have to pay for something now their council tax funded? I still see lots of parents refuse to pay just to use the swings etc- and I can’t blame them. BTW, until they put a fence around Eastcliff playground, I (and a lot of others)don’t like taking my boy… Read more »
Vote Up00Vote Down
Nitonia
What has happened to the Botanic Gardens is nothing short of Tragic. Visitor numbers are down for one reason only and that is a chronic lack of value for money. The movement of the play equipment to Ventnor Park to me now seems like a good idea but you cannot guarentee that this will remain a free facility indefinitely. However I think the suggestion that it be… Read more »
Vote Up00Vote Down
Bluebird
I’m dismayed by the suggestion the playground may move. We as a family must be in the minority, but we’ve continued to visit the Botanics after charges were introduced as our 2 year old loves the playground and setting. We’ve been making use of the visit after 3.30pm for half-price fees (£2 playground pass is news to me!) We’ve spent a fair amount in the cafe and… Read more »
Vote Up00Vote Down