Watch the brave souls make their dash into the cold sea at this year’s Ventnor Boxing Day Swim. 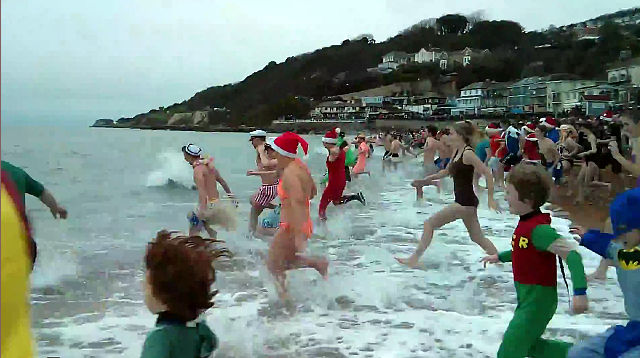 The Ventnor Boxing Day Swim (2014) kicked off today at midday.

Many more swimmers
The number of swimmers has increase notably this year, with the general consensus being that the milder-than-normal temperature was a contributing factor.

Nonetheless, those taking part are brave – running their bodies into the sea, on what is an undeniably a Winter day.

Bigger crowds
Each year the crowds who come to watch the madness seem to increase and it was especially pleasing to see that those who had come for the event stayed to enjoy some of the delights of Ventnor town.

Strong giving for PATCH
Speaking to some who were collecting for the Ventnor cancer charity PATCH (People’s Approach To Cancer Help), it was pleasing to hear the viewing public gave generously – which is, after all, the point of the event.

Well done to all!