After the success of their pizza delivery service, the Rex Piano Bar is expanding the available menu and the area they deliver to.

We were really pleased when new Head Chef, James Torin Moore got in touch to ask for VBs help to promote Abdel Kaissam’s new delivery service. This article is part of what we’re doing for them.

The Rex Piano Bar started a trial two weeks ago to deliver quality pizza to Ventnor and the surrounding area. 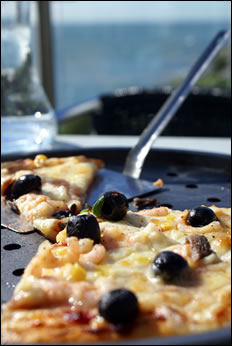 We popped in there at the end of last week and chatted to the owner Abdel Kaissam and head chef, James about the trial.

They tell us that it’s been such a success, not only are they going to continue it, but they’re expanding it in two ways.

Menu expanded
Beyond the pasta and pizza that they deliver, the Rex are making many of the dishes from their menu main available for delivery as well. 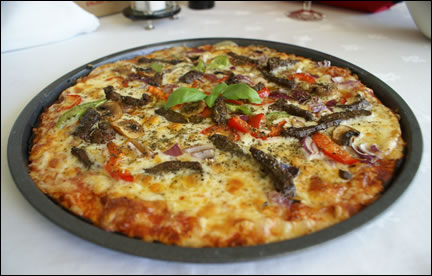 Delivery area increased
If you live around Ventnor and have felt excluded from delivery, your concerns may have come to an end as the delivery area has been expanded to include Bonchurch, St Lawrence, Whitwell, Niton and even Chale.

Their timing couldn’t be much better. With the weather making moves to close in, what better idea than to stay at home by the wood-burner, eat delicious food without having to worry about making it, simply by lifting the phone handset? 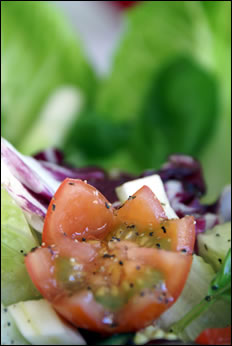 Best pizza in Ventnor
Last week we sampled the Rex thin crust, 10″ pizzas – specifically the Beefy Beast (Steak, red onion and mushroom) and Seafood Medley (Tuna, shrimp, salmon and olives) – and found them to be delicious.

Not only were they well-presented, but were really tasty and filling, with two pizzas and a mixed salad easily able to satisfy three adults, making it good value at £9.95 each for a pizzas.

We had the additional benefit of eating them in the blazing sun outside at The Rex Piano Bar, over-looking the beauty of Ventnor.

After eating them, we agreed that they were the best pizzas that we’d eaten in Ventnor (by no means influenced by us being paid to write this). 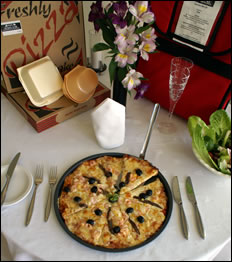 Testimonials
It’s not just us that found the food good. Miss Robson, of East Street, Ventnor had ordered a pizza for delivery recently converting her into a fan, “I really enjoyed it and I’m planning on making a weekly thing.”

Mr Ramjet of Upper Ventnor had high praise for the pasta and pizza
he’d ordered, “They were so good, I’m going to book in at the restaurant.”

Full details
For full details of which dishes are available and how much they cost, take yourself over to menu page on The Rex Piano Bar website

To see larger version of the photos, just click on the thumbnails below.

If you like what we’ve done for The Rex Piano Bar here and would like for your company featured on VentnorBlog, just get in touch. We’ll be happy to talk you through the packages we’ve got available.

Looks good – have never eaten there before, but might give the delivery service a go.

Love the idea of something other than Indian or Chinese as a take away. Hope to give this a go at the beginning of next month (after pay day)!

The food looks good and I must give it a try. One point I would like to make is that this article is advertising not a review of the premises and as such I think this should be reflected in the title rather than just being mentioned in the text.

Vote Up00Vote Down
Simon Perry
I’m going to try to treat your comment as a positive suggestion. Why would it be in the title / headline? You don’t get that in other media off or on the Island. Many of them don’t even reveal the connection between monies that they receive and what they are putting out. We’ve made the decision that VB will always be clear about this. To clarify things… Read more »
Vote Up00Vote Down
Spider
Interesting response and one that comes across to me as very defensive for a simple suggestion such as ‘advertisement feature’ to make it clear from the start that it is not an independent review. Please treat my comment which ever way you want and no I would not expect to see it in the title, but maybe as a tag line below the title. “We went out… Read more »
Vote Up00Vote Down
No.5
if you are not aware, this is simons and sals blog, they choose to do this at their expence, they choose to spend time letting the people of Ventnor, and the Island as a whole know ‘their interpration’ of what is happening…because it is their blog. The fact that we ‘on masse’ choose to follow it is neither here nor there. They are private individuals who choose… Read more »
Vote Up00Vote Down
Spider
Yes I am fully aware and if they pull the blog it is their choice. What surprises me is that I was only asking for a clearer indication in the title (title area) for sponsored features and now seem to be in the position of taking a direct dig at Simon & Sal (and I think it is very sad if people actually thing that). If suggestions… Read more »
Vote Up00Vote Down
fat boy fat

Spider, if you look at the bottom of every article they are categorised by what they are to do with or related to. Posts similar to this have always in my memory of reading had ‘Sponsored Feature’ listed, as this one does along with ‘Food & Drink, Ventnor’

Vote Up00Vote Down
Spider
Thanks for the info Chris and I am aware of the link at the bottom of the page I was only suggesting that it should feature at the top. Had a look at all the sponsored features and in that section the words ‘sponsored feature’ features under the title of each summary piece. Not much to ask, but this article made it clear the differences between a… Read more »
Vote Up00Vote Down
DOD
It’s common practice for media to accept advertisements with the unspoken proviso that they will check out the goods or services advertised.If the advert is truthful they will often then insert an editorial recommending the business concerned.And,conversely if the advert is found to be untruthful,it will be withdrawn. I am speaking here of honest publications such as the VB. All that seems to have happened here is… Read more »
Vote Up00Vote Down
Sad Owl

What a lot of fuss over nothing.
I think I’ll have a Vegetarian Feast, with a side order of Spicy Wedges, please!

Ah Sad Owl, at last the voice of common sense and reason! 10% discount coming up whenever you are ready : )

Forget the missery guts. Best of luck to you with making money and the Rex with their new business.

I agree. Best of luck to the Rex and it’s great at last to see the VB actually starting to earn some money from it’s excellent work.

Hurrah! Hurrah!
Food! At Home! No Cooking!
Not Indian or Chinese or cheap pizza and burgers!
Hurrah!
That is all.

Thank you to Simon and Sal at Ventnor Blog for running this article and to the very positive response from everyone that has called us over the last couple of weeks, as a result of the article we have continued to increase sales and the exposure on Ventnor Blog has been invaluable.

What’s happened to your web site?