Ventnor’s Flower Fairy at it again, this time with positive noises from BT

It sounds as though BT are going to embrace the champion volunteering efforts of Lesley Brown – aka the Ventnor Flower Fairy – as she sets to work outside the BT building. 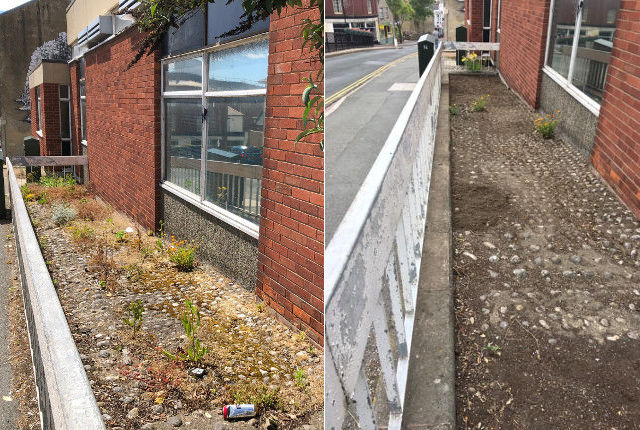 The latest news from Lesley Brown – aka the Ventnor Flower Fairy – in her quest to smarten up the area by the BT building is sounding very positive.

You might remember that Lesley did an amazing job in the flower beds outside the Winter Gardens and had her sights set on doing something special by the BT building, which is next to the Ventnor Giant as you approach the town from the East.

Railings to be painted
Well, a few emails later and Lesley’s had very positive response from BT.

They’ve agreed to meet to discuss what she will be allowed to do in area surrounding the building. But not only that, they’re also getting quotes for the railings to be painted.

Since Lesley has been in touch with them, they’ve also already chopped back the massively overgrown self-seeded trees from the corner area next to the former brewery.

Meanwhile Lesley herself has been down and cleared all the rubbish, weeded and even cleaned the windows. It’s already looking loads better.

Tip of the hat
Her partner, Graham Middleton, also deserves a tip of the hat. We bumped into him doing some work to the beds in the Central car park last week as part of his involvement with the Ventnor Enhancement Fund.

Well done Graham and all those working hard to make our town look so great.

Follow the progress
If you want to stay in touch with what Lesley has been up to, you can follow updates on the public Ventnor Flower Fairy Facebook Group.

Lesley’s passion for pollinators and her enthusiastic community spirit are an inspiration to us all.

5 Comments on "Ventnor’s Flower Fairy at it again, this time with positive noises from BT"

Inspiring!
The Newport grass verge clearer. The Ventnor flower lady. Locals taking ownership of their environment, where governmental and other ‘organisations’ so frequently fail. It makes you want to join in, doesn’t it?; and it may inspire the new ‘Lost Generation’ – lost to over-reliance on addictive new technology; Living in a world of make-believe?
Well, maybe.

Is there an app for it?

Well done Lesley and Graham, perhaps a few of the town councillors could roll up their sleeves and lend a hand too?

To be fair to the town councillors – Jamie McCauley has arranged hanging flower baskets around the town in association with the excellent VEF and Steve Cockett has been out and about planting wild flowers and beach cleaning. Our two Island council Tories appear to have done very little though.