We’re not in the least bit surprised that Phlegm’s fantastic piece of street art that now adorns a three-story building in Ventnor has been selected as on the best creations in August across the globe. 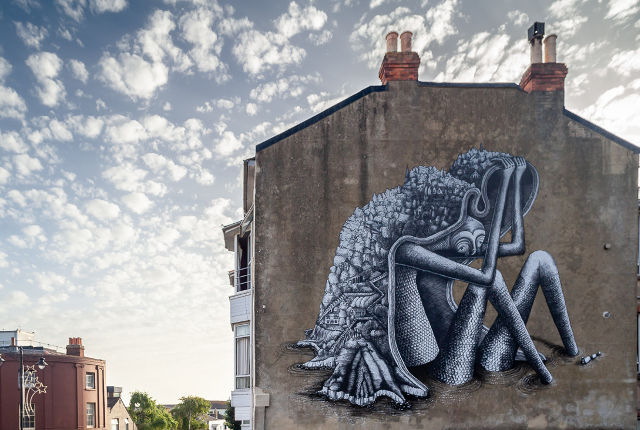 The Ventnor Giant has been named as one of StreetArt.Today’s best pieces of work discovered in August 2018.

The three-storey artwork was created by world-renowned artist, Phlegm. It was commissioned by Ventnor Exchange as part of the Lift the Lid project and proudly welcomes all travelling from the East into Ventnor.

Seven best murals
In the seven best murals discovered in August (check out the link the others on the list are also amazing), StreetArt.Today have placed Phlegm’s Ventnor Giant at the top of the list saying,

#1 PHLEGM – There is always a lot to see in Phlegm‘s stunning, black/white murals. New work by the British muralist in Ventnor, Isle of Wight, England for Ventnor Exchange.

This wonderful mural is an absolute joy to see every time we pass it and we love that it continues to bring attention to the town, with several references in magazines and Websites.

The creation
Check out this video short by Glass House Productions of the creation of the mural.

They are an urban and street art agency based in Amsterdam who work with globally recognised artists on award-winning projects.

If you’re a fan of street art, check out their great Website.