A rousing talk from one of the Vestas sit-in people. 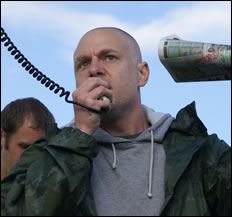 Mike Bradley was one of the Vestas employees that spent time inside the Vestas sit-in.

He described it to the rally outside Vestas as “One of the greatest privileges of his life.”

Praising those still inside, he said that “They’ve shown everybody on this Island that it’s possible to defend jobs.”

“The Labour government should be utterly ashamed,” he said and also criticised Ed Miliband.

Rousing the crowd he told them that “This is a fight that can be won,” finishing with “If you roll over, you lose. If you fight, you win.”

The crowd gave a huge reaction.

“Sustainability on Eco Island is about keeping local communities thriving through the encouragement of businesses and investment. The Council will be able to use its Island Plan to encourage local businesses to start up and sustain our communities.”

Classic. Well done on digging back.

If he was that emotional about it why come out?

I agree though the government have failed these people but not vestas, they have merely made a business desicion based on this govermnents apathy to upholding the promises it has made.

I’m not sure if it was this gentleman or another speaker (there were lot’s on the Friday) but I believe he had a very young family so came out to be with them.