Victoria of Wight: Wightlink’s new flagship heading to the Solent

Wightlink’s new flagship Victoria of Wight is launching from Turkey this week. Expect to see her in the Solent for several weeks as crew are trained to operate her before she enters service 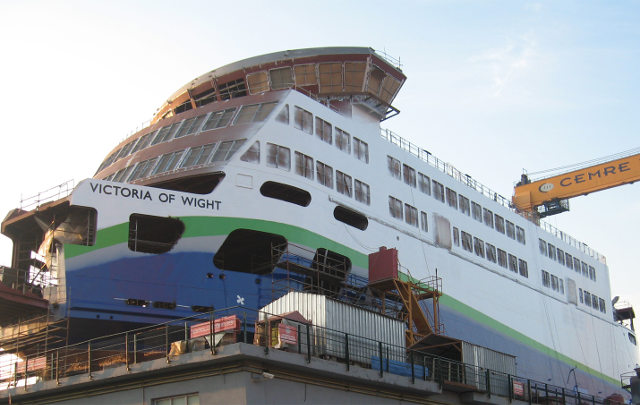 Victoria of Wight, Wightlink’s new hybrid energy ferry for the Portsmouth-Fishbourne route, will be launched at the Cemre shipyard in Turkey on Wednesday 7 February 2018.

“This will be a proud day for Wightlink as it marks the culmination of our largest ever investment. We have spent £45million on our environmentally friendly new ship and improved port facilities on our lifeline route to the Isle of Wight.”

Training in the Solent
Steelcutting at the shipyard began on the ferry company’s new flagship in November 2016. Cemre will complete construction work following the launch before the ship travels to home waters. Victoria of Wight will be seen around the Solent for several weeks as crew are trained to operate her before she enters service in the summer.

“This will be a traditional launch with the vessel making its way down the slipway into the water so it will be quite a sight.

“We look forward to bringing Victoria of Wight home later this year and showing her off to our customers.”

After Victoria of Wight arrives in the Solent, Wightlink will embark on a programme to train 11 crews to make the most of the opportunities offered by the innovative hybrid battery technology to reduce noise and emissions before introducing her to the schedule.

The story so far…
Wightlink’s £45million investment started with work to extend the upper car deck of Wightlink’s current flagship St Clare to increase her capacity.

Double deck boarding ramps were built and installed at both Portsmouth and Fishbourne car ferry terminals to allow vehicles to be loaded on two levels at the same time. This immediately reduced delays and improved punctuality.

The arrival of Victoria of Wight completes the project.

More than 50 shipyards around the world, including the UK, were asked if they were interested in building the ferry. Wightlink received 22 tenders and shortlisted five yards – from Turkey, Spain and Croatia – before choosing Cemre on the Sea of Marmaris, at Yalova, south of Istanbul.

The decision was made on the grounds of value for money and the capacity to deliver the vessel within two years.

3 Comments on "Victoria of Wight: Wightlink’s new flagship heading to the Solent"

Clearly we are good to appreciate the current half hourly crossings which take place in peak times. Can’t see this letting to anything except crossings every 1, 2 or even 3 hours.

Vote Up00Vote Down
iowdave
I can’t see Wightlink running a half empty ship so reduced sailings are bound to follow. When are they going to get rid of St Faith and St Cecilia, both of which are well past their sell-by dates. We had the misfortune to travel on one of these a short time ago and the (only) lift was out of order. As we were instructed to vacate our… Read more »
Vote Up3-1Vote Down