Back in November we chatted with Deputy Manager, Dan about the plans for the new East Cowes supermarket

It’s been open for just over a month now, but back in November we chatted with Department Manger, Dan Olive at the opening of the East Cowes Waitrose. 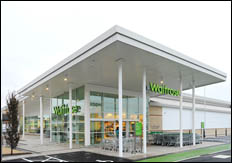 In addition to the many local residents who attended the opening on the day, unusually they were joined by the entire Waitrose Management Team, made their way across the Solent. We say unusually, because when a new store opens, it’s normal for just one director to attend.

Dan, who is originally from Ryde, was pretty chuffed, after previously after working in Southampton and Kent, to be back on the Island.

He went on to explain that the supermarket operates on a three tier system of goods for sale.

As well as stocking the branded products and everyday products, they also stock more luxurious items in the Seriously and Duchy ranges.

Listen to the podcast by clicking on the play button below
[audio:http://otw-audio.s3.amazonaws.com/dan-olive-waitrose-opening.mp3]