Warriors co-promoter Barry Bishop said the team’s commitment was second to none. 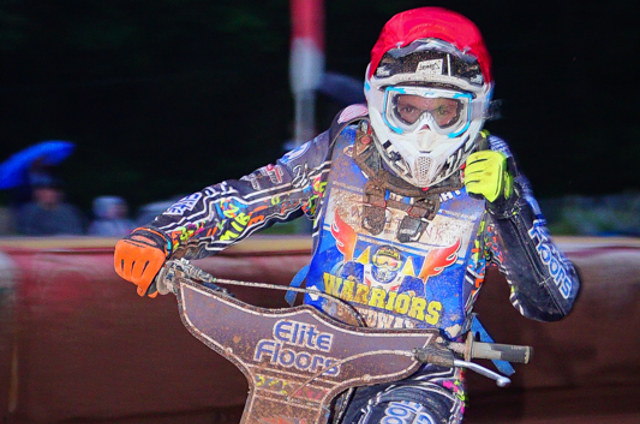 Isle of Wight Warriors 39 Mildenhall 51
The Isle of Wight speedway teams had mixed fortunes in last night’s league action as the depleted Warriors fought valiantly to match the much stronger Fen Tigers whilst the Wizards turned in an impressive performance to see off a useful Racer quartet.

Warriors went into this meeting on the back foot. With Danno Verge sidelined because of concussion protocols following his spill at Kent on Monday, the home side were dealt a massive blow when high scoring Georgie Wood called off around 11.00 am having failed to respond sufficiently to early morning treatment on neck and back problems. With time against them, and despite rigorous efforts, the Warriors management failed to secure a guest replacement for Wood and were forced to introduce junior rider William O’Keefe for a baptism of fire.

The meeting opened with a fair splattering of rain and as if this was an omen, the Warriors bad luck did not stop there because they lost Scott Campos after a spectacular fall in heat 5. Campos was clearly shaken by the impact of the fall and his absence for the remainder of the match left effectively home four riders to tackle a Mildenhall side that made full use of the facilities available to them to cover for two of their missing riders.

Tracking Island specialists Danny Ayres and Nathan Stoneman plus the rejuvenated Henry Atkins, Mildenhall always looked to have the top end fire power to amass plenty of race wins and so it proved, but make no mistake, each and every one of the plucky Warriors gave their all for the cause with captain Ben Morley top of the pile with 17 points, Chad Wirtzfeld (pictured) showing bags of determination and passing ability and Chris Widman continuing his recent improvement with two race wins. Had both sides tracked their usual seven man line-ups, there was plenty of optimism on the terraces the Warriors would have run out winners on the night.

Isle of Wight Wizards 23 Reading 13
Lighting up the conclusion to the evening’s racing was the Wightlink Wizards comprehensive victory over the Reading Racers who tracked the experienced Nick Laurence and current Plymouth rider Jamie Bursill.

The Racers were relying on those two to hold the Wizards at bay, but with Chad Wirtzfeld taking three straight forward wins (incidentally his seventh, eighth and ninth rides on the night) and Morgan Williams, Jamie Sealey and Chris Watts all making telling overtakes, the Wizards were home and hosed with one race in hand.

“I’m so proud of our team. We may have lost on track but the team’s commitment was second to none. There are so many factors we could list that went against us tonight, even before a wheel had turned, however the boys stuck together gave it their very best shot and can hold their heads high in the face of considerable adversity. We didn’t quite ‘Do It For Danno’ but we did do it for our supporters who gave us splendid support throughout.

“Crowning it off was another super performance from our Wizards. I say it every week but these guys work so well together, support each other magnificently and deserve every success that comes their way. Chad was absolutely shattered after all his rides in both meetings but he dug in to lead the boy’s home in style. That after match lap of honour was rightly deserved and I thank all those who stayed on to cheer the Wizards home”.

The Warriors have a good chance to gain revenge as they head back to Mildenhall on Sunday for the reverse fixture. Both teams have riders absent and it is unlikely that either side will be unable to confirm their full line-ups until match day.