WATCH: Hundreds ‘link around the rink’ against AEW

Despite the wind and rain, around 300 people gathered at Ryde Arena today to protest about its closure some two years after AEW closed the doors on its use. 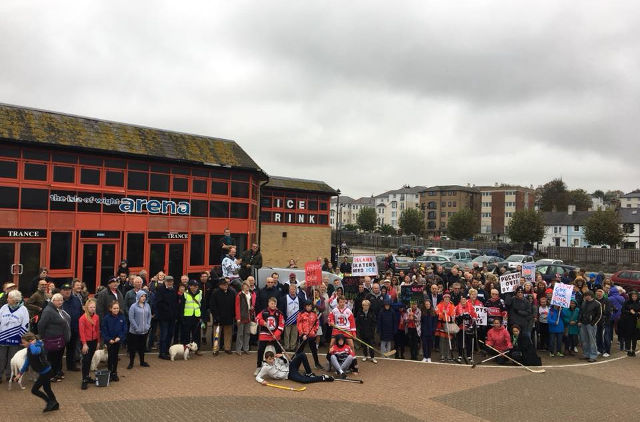 This in from the Ryde Arena Community Action Group. Ed

This morning 300+ people, including Isle of Wight Conservative MP, Robert Seely and local councillors from across the political spectrum united in forming a continuous link around Ryde Arena on the second anniversary of its sudden closure by the leaseholders AEW.

This was all the more remarkable given the windy and rainy conditions and the fact that many of the skaters and their coaches could not attend as they had to be on the mainland training.

Supporters gather around the building

AEW want four times the commercial valuation
The community is frustrated with the impasse over the future of Ryde Arena which was named an Asset of Community Value. AEW offered the rink for sale for four times a commercial valuation, and Islander’s widely believe them to be holding the community to ransom by allowing the building to sit empty and dilapidated, blighting a major gateway to the island and while hoping to profit through a change of use.

Leisure facilities are rapidly disappearing and the loss of the Ice rink has been tragic for the youth in the ward, which is one of the most disadvantaged in the country.

Bob Seely also congratulated the skaters who have carried on against great odds for what they have managed to achieve in spite of all the difficulties of training at rinks on the mainland.

Party atmosphere despite the weather
“Olly” the Olympia ice surfacing machine and some of the children’s balance penguins which have been purchased by the community, were brought out to the delight of the crowd and former rink manager Jim Matthews played music from the ice discos that were popular at Ryde Arena for almost 30 years.

Bob Seely MP and Wayne Whittle (the councillor for the ice rink’s ward) then addressed the crowd from the top of the machine.

Jukebox Jazz entertained the crowd as they came together, linking hands, arms, hockey sticks and placards around the rink. The link was filmed by a drone (which was challenging considering the weather conditions!) after which the synchro skaters, supported by some of the junior hockey players, performed a flash mob dance.

1 Comment on "WATCH: Hundreds ‘link around the rink’ against AEW"

newest oldest most voted
michael5rydeeast
I was proud to be there and stand with my community in standing up to the unacceptable face of big business. Even after two years, the community can come together on a wet October day, and say “AEW, you may have closed our rink, but our hearts are still open and our community spirit is very much alive and our campaign will continue until the building is… Read more »
Vote Up130Vote Down