Many Islanders travelled to London last year to protest at Trump’s visit to the city, so cross-Solent operators may be busy on 5th June for more than one reason. Portsmouth’s leader has a few choice words about the President’s proposed visit too. 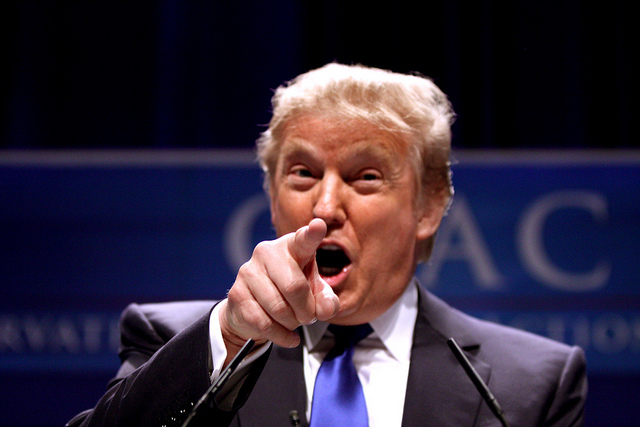 Leader of Portsmouth City Council, Cllr Gerald Vernon- Jackson, said they “don’t want to see” President of the United States, Donald Trump, in the city for the D-Day 75 commemorations.

The President is set to travel to Portsmouth on 5th June to take part in the city’s D-Day 75 event on Southsea Common, which will be honouring the survivors of the 1944 Normandy invasion.

Cllr Vernon-Jackson told the Portsmouth News that he didn’t want to see Trump in Portsmouth.

He explained that the council had made a conscious decision not to invite the President. They had considered inviting all the Heads of state of Allied nations but decided against it.

Many Islanders travelled to London last year to protest at Trump’s visit to the city, others like ‘The Donald’, so cross-Solent operators may be busy on 5th June for more than one reason.

“In my view, Trump is a racist, misogynist crook. A deeply stupid, compulsive and sociopathic liar, who is subverting the US constitution.

“This obscene clown intends to dishonour the D-Day ceremony in Portsmouth through his attendance. There are likely to be large popular protests against Trump’s presence, and the right-wing press will doubtless clutch its pearls and demand that we ‘honour’ or ‘respect’ his presence.

“This is a ridiculous claim, however. D-Day was a major battle in a war fought against precisely the sort of aggressive, racist right-wing nationalism which I believe Trump represents.

“In my view, he besmirches the memory of the soldiers who sacrificed in that war by daring to try to bask in their reflected glory. They were fighting against people like him, not for him.”

“The Americans often speak of ‘respecting the office, not the man'”. This is too glib. Every time we put Trump on a podium, or treat him with anything other than contempt, we normalise his actions – the lies, the hatred, the racism and misogyny. I believe he is responsible for the deaths of children in internment camps he built on the US border – that he has given support to the violent racism of the KKK. As we know from the Mueller report, he has introduced a deeply corrupt culture of lies, bribery and criminality into the heart of the US political system. If we fail to protest, if we treat him with a false ‘respect’, then we legitimize these actions. We tacitly agree with them. We tell the victims of his actions that they do not matter.

“I can’t condone that. As the soldiers on D-Day did, we should be fighting against everything Trump represents, not pandering to him. I’m embarrassed and ashamed that the Tory government has invited him to visit our country.”

Image: gageskidmore under CC BY 2.0

At least Trump was democratically elected unlike the leaders of China and Saudi Arabia who we have also welcomed to our shores: both countries dictatorships where human rights are denied

Trump was elected only by the Electoral College system when Clinton actually received more votes. This was originally set up to “compensate” the slave-owning states for a lack of representation due to much of their populations being ineligible to vote on account of being slaves – enabling the slave “owners” to vote for their slaves. Nowadays it favours right-wing (Republican) voters called “Bubba” and “Zeke”.

Don’t mind all the US sailors spending their money in Portsmouth when one of ‘his’ carriers are in town though….

They are not alone in not wanting trump but we must respect his position. Its just as childish stamping their foot and refusing to let him attend. his position is not one to make an enemy of. do you think he cares what a tin pot English town leader thinks of him?

What do the traitorous rantings of a ‘Liberal’ have to do with anything. At least Trump is trying to improve his country. Liberals want to surrender this country to a foreign power.

And which foreign power are you surrendering to?

The mayor of Portsmouth doesn’t speak for the rest of us here. Maybe he should consider resigning?

Vote Up12-7Vote Down
Mark L Francis
Places like Saudi Arabia we expect no better, but the what happens in the USA affects us all and since they are so eager to promote their culture in everything from films, TV to t shirts in Primark everything is high profile. And it seems that in many ways their country is stuck in 1776 when everyone had to have a gun (to protect themselves from Native… Read more »
Vote Up13-9Vote Down