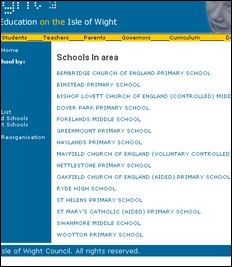 A six week consultation on options to reduce the number of primary school places in the Freshwater and Totland area will begin on Monday 13 June.

Because the number of places in the area is much higher than children to take them, the council is looking to reduce provision. The council’s preferred option is to close Weston Primary School as part of the move to reduce surplus places.

“Because of the small number of children at the school, it needs over £1500 more funding per pupil than the Island average to keep going. This funding should be used to raise standards at schools rather than paying for empty desks”

There are sufficient available places to accommodate any pupils at other local schools.

Change to trust school supported
The council and the Church of England Diocese of Portsmouth will also actively support the change of All Saints Primary School from a voluntary controlled school to a trust school although this will not affect its religious character. This change of status will mean that the new All Saints governing body will be wholly representative of the local community. This is important because Weston is the only non faith-based school west of Newport.

Formal consultation on the preferred option to close Weston Primary School will end at 1700 on Friday 22 July.

There will also be a public meeting at West Wight Middle School in Freshwater on Thursday 23 June from 1900 – 2100.

Residents can comment by emailing [email protected] or in writing to:

Once again the answer to the question ‘if it ain’t broke why fix it?’ is ‘profit and privatisation’.

Vote Up00Vote Down
Jeremy Cangialosi
Re: Consultation on the reduction of primary school provision in the Freshwater and Totland area. (Closure of our local Rural Community School, Weston Primary School) Totland has seen a decline over the years of young families and children living in the area due to a lack of affordable housing and loss of local jobs, the council’s view is that a shortage of pupil subscription to Weston Primary… Read more »
Vote Up00Vote Down
Asite2c

If they continue down this road sadly I can see many of the Island’s rural communities going the same way which would be disastrous for the Island.

Vote Up00Vote Down
Peter
Deciding to close Weston has nothing to do with education, but is purely based on money. Weston has been judged by Ofsted to be the best in the area – good with outstanding features. So how can the education standards in the area be improved by closing the best school? Would any of the councillors making these decisions be happy if they were forced to take their… Read more »
Vote Up00Vote Down
Jeremy Cangialosi
This is a letter from Ed Buckner, He has a PhD in Educational Leadership (Educational Foundations), Georgia State University (1983) M.Ed. Curriculum and Instruction (Secondary English), Georgia State University (1975) B.A. English, Rice University (1967)Award for excellence in teaching, Georgia State University Foundation, 1980-1981 and 1983-1984. Elected to College of Public and Urban Affairs Executive Committee, 1983-1985. Elected as Senator for Urban Studies Department, Georgia State University… Read more »
Vote Up00Vote Down
Jeremy Cangialosi
For the chap who asked me to post this: The Human Rights Act protects your right to have your own thoughts, beliefs and religion. Right to education . . . “No person shall be denied a right to an education. In the exercise of any functions which it assumes in relation to education and to teaching, the State shall respect the right of parents to ensure such… Read more »
Vote Up00Vote Down
Jeremy Cangialosi
Paul Salahuddin Armstrong Co-Director The Association of British Muslims “I’m wary of single faith schools. The potential for discrimination is too great and I prefer truly inclusive options. After all, what is the faith of a 5 year old? I certainly had no idea what my religious/philosophical beliefs were at that age and I doubt many children do. Hence, even for the communities which faith schools cater… Read more »
Vote Up00Vote Down