The Isle of Wight Road Safety Forum is supporting a scheme encouraging revellers to ensure they have a safe way of travelling home from a night out. 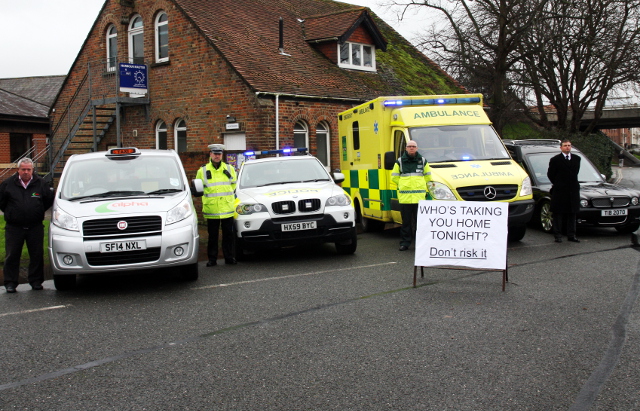 The forum has reproduced a photo originally set up by Ayrshire Police to prevent drink driving over the festive period, titled “Who’s taking you home tonight”.

The image features a taxi, a police car, an ambulance and a hearse demonstrating that anyone who does decides to drink and drive could be arrested, be seriously injured or even be killed.

“Alcohol affects everybody’s driving for the worse. It creates a feeling of overconfidence, makes judging distance and speed more difficult and slows your reactions.

“The image from Ayrshire Police has been very positively received and we are keen to continue promoting the message with support from local organisations including the NHS, police and businesses.”

“All too often at this festive time ambulance crews are faced with the chaos caused by driving under the influence of drink or drugs. Either the driver is injured or they injure others, sometimes seriously, which is unacceptable.

“We have very good bus services on the Island, there are taxis and having a designated driver is always a good alternative. Please have a great festive season but don’t drive under the influence – we don’t want you to end up as a casualty or even killed.”

“We take a risk every time we get into our car and the less responsible you are when driving, the greater that risk becomes. We know that alcohol affects people’s response times and can lead to serious or even fatal injury both to the driver and others. This image literally drives that message home.

“Remember you don’t have to feel drunk to be a drink-driver. You may still be drunk the morning after a night of drinking. It takes an hour to process just one unit of alcohol so if you have had a heavy night it could be 4pm the following day before you are safe to drive. Choose a designated driver or grab a taxi. Be sure, be safe and if in doubt, don’t drink and drive.”

Good message from all parties.Any one in any doubt get a taxi .The risk is to great,just get a Taxi first call and put your money aside for it before you buy the first round.I would put my money on this guy from Alpha getting me home safe.

I saw a comment from some [part of comment removed by moderator] on the CP Page! You can always get a taxi on the IOW. The big companies get overloaded and can’t cope! Us small guys will always do our best to serve you. Service is better than price

Now that fuel prices have come down will taxi fares…You must be joking.

Drinking and driving: I’m for a total ban – Look at the lives it would save.

Don, taxi fares don’t go up with every fuel price rise, so why should they be reduced when fuel prices go down. Anyhow I think the price of a taxi is cheaper than people losing their license, or worse injuring themselves or others, sometimes fatally. Happy new year :)

Vote Up00Vote Down
Cynic
Some years ago when I was reasonable squash player, my playing partner and I arrive late for our court booking and had to wait an hour. So we went to the bar and had a pint (just one) to pass the time. I was staggered by experiencing when I came to play the game, my anticipation, reaction time and coordination was quite a bit slower: I was… Read more »
Vote Up00Vote Down
getting older

so how about today? Still think you play squash as well as you did in your prime? No, but you still consider yourself safe to drive. So how does that fit with your analogy?

Vote Up00Vote Down
Cynic
Nope- walking sticks make squash difficult these days. However I still keep fit with gym workouts three times a week, regular eye tests, coordination/reaction time still fairly sharp plus good anticipation honed by (mumble) decades of driving experience all over the world- yes- I am still safe driving. (Anyway, the police in the family will soon tell me when I am not!) What about you? What is… Read more »
Vote Up00Vote Down