Ryde Rowing Club – in conjunction with the Isle of Wight boat builders AB Composites – will build a new mould for a Coastal Four, allowing IW rowing clubs the chance to have competitive racing Coastal Fours built on the Island. 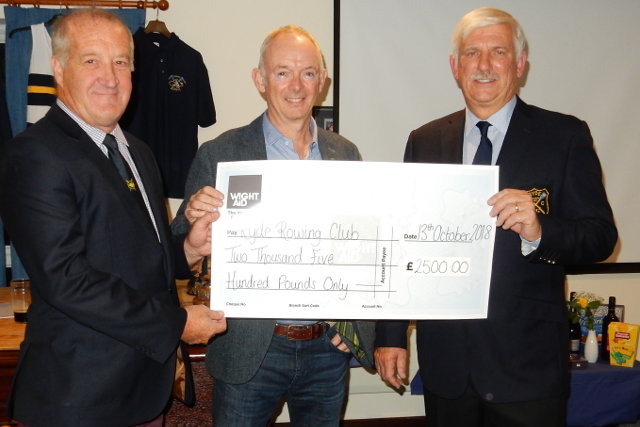 Wightlink sponsored Ryde Rowing Club celebrated another successful season at an Awards Presentation at their Clubhouse on Saturday (13th October 2018).

The Club President, Peter Allsopp, welcomed around seventy members and guests and thanked them for attending and for their support of the Club over the last year with a special thanks to the Club’s main sponsors, Wightlink, and the main sponsor of the Regatta – TLM Laser.

The Ryde Club – and other Clubs – have an urgent need for a new Coastal Four. There are currently very few boat-builders making competitive Coastal Fours and the waiting list is more than two years.

So the Club – in conjunction with the Isle of Wight boat builders AB Composites – and with the support from Wight Aid – is going to build a new mould for a Coastal Four – which will allow the Club and the other IW Clubs the opportunity to have competitive racing Coastal Fours built on the Island by an Island firm – which will hopefully also attract interest from the mainland clubs.

Geoff gave a brief explanation of the Wight Aid Foundation work whose primary purpose is to provide funding to charities, groups and organisations which aim to improve the lives of people who are living on the Isle of Wight Finally the traditional “First Hants & Dorset ARA win” Club spoons – a tradition that goes back more than seventy years were awarded to Austin Smith, Tom Starkey, Tye Cameron and Ben Sanderson. There were also special awards to Maggie Sanderson and Angela Clark for their support of the Club – with the catering team and behind the bar.

Ryde Coxswain Bryony Reeve – who having moved to the mainland – now rows for Southsea was in attendance – and brought over the Poole Regatta Novice Fours Trophy that Southsea had won – with Ryde’s Ben Sanderson racing in the composite crew so he could have a photo with the trophy.

The evening concluded with a substantial buffet, a photo montage and films of some of the season’s racing.