Riders from the Wightlink-Wight Mountain riders compete over the weekend in races at Goodwood and Thruxton. 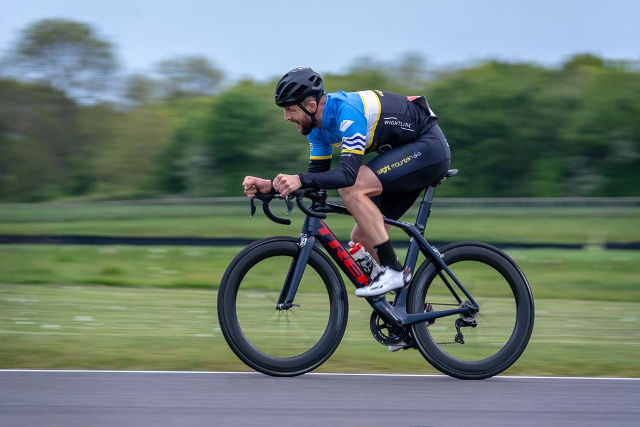 Southdown Velo at Goodwood
On 7th May Wightlink-Wight Mountain team rider Matt Allsopp made his way to the second race of the series at Goodwood.

Trouble with his journey meant Allsopp had no time for a warm up, in fact he was lucky the organisers held the race until he arrived which was much appreciated. With no warm up Allsopp found himself straight in a break of eight riders chasing a two-man break further up the road.

It was high-paced and with constant attacks within the group it split half hour into the race with Allsopp rejoining the main bunch for a short period until another chasing group formed unsuccessful in catching the break Allsopp attacked solo in the last lap he managed to hold off the other riders getting a top ten finish.

Thruxton
James Veal opens his race season with a seventh place at Thruxton. James’ first race of 2019 was a category three circuit race at Thruxton. In a large field of over 60 riders the first few laps were at a frantic pace as riders were trying to get to the front of the peloton, a break of three riders managed to get a lead of about quarter of a lap when James decided to try and bridge over, it took a full lap for James to catch the break which then stayed away for three further laps before being caught with four laps remaining.

After catching his breath for a lap James knew that his only chance was to remain at the pointy end of the race and try to finish well in the bunch sprint. The last lap saw a rise in speed as riders began to sense the conclusion of the race, entering the final chicane in seventh position James was unable to catch the rider in sixth position but managed to hold on for a points scoring seventh.

This was James’ first race representing Wightlink Wight Mountain Race Team and hopefully the start of many more points finishes.