Ryde Theatre was buzzing as an impressive cross section of the community eagerly anticipated Andy McKee, one of the most popular fingerstyle guitarists of the modern era.
Every seat in the house was full for an artist whose virtuoso YouTube performances have captured the World’s imagination, … 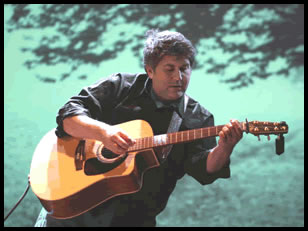 Ryde Theatre was buzzing as an impressive cross section of the community eagerly anticipated Andy McKee, one of the most popular fingerstyle guitarists of the modern era.

Every seat in the house was full for an artist whose virtuoso YouTube performances have captured the World’s imagination, and the attendance is a fitting finale to his sell out UK shows.

“It’s so important to keep places like this open to play…Portsmouth’s lost many of it’s great venues which is a real loss to the community,’ muses Tim Cheatle shortly after opening the entertainment. 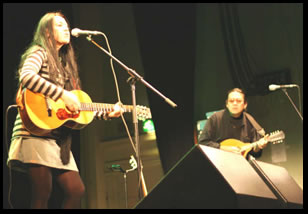 The next act perfectly encapsulates the Island’s unique relationship with music – JC has performed with the likes of Nigel Kennedy and Midge Ure, and his partner Angelina teaches at Island College of Music, Platform One.

McKee’s opening number is organic, but it’s his second – Keys To The Holy Fire -and his explanation it was inspired by a science fiction novel, that perfectly surmise his unique and futuristic approach to the guitar.

“I’m inspired by everything from Metallica to Billy McLaughlin, I love music and I love to convey my emotions,” explains McKee afterwards, and this is evident as the rest of his set unfolds.

Each song is surprising and refreshing, because, despite being a talented fingerstyle guitarist, there’s no unnecessary filler or showboating, so that, by the time his Harp guitar finally makes an appearance, no one is quite sure what to expect next. 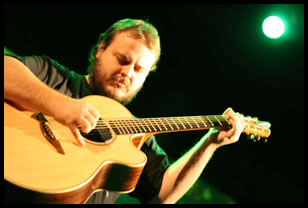 For those unfamiliar with the instrument, the Harp guitar is basically its standard six string cousin with a shoot of sub-bass strings curling up from the body – it appears ungainly, unplayable, and strange.

Not only is McKee a master of the instrument, he would also appear to be a master of his craft, and his lyric free songs consistently manage to transcend a broad range of topics and themes.

The Friend I Never Met is a tribute to his hero, the tragically deceased Michael Hedges, and a series of drums and gentle taps on the guitar’s body convey a completeness often associated with his muse.

She is a pensively beautiful love song written in the early stages of a relationship, which has blossomed with McKee’s talent (she is now his partner of six years), and – by the time we arrive at a tune dedicated to his sister (Heather’s Song) – McKee is comfortable enough to joke with the audience that his sister is really called Michelle. 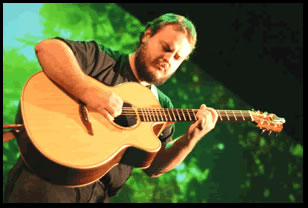 The closing number is as wonderful and warming as a Sunrise on a Summer’s day, and – although there was an unfortunate period of talking at the bar before the intermission – by the end the culprits have remembered their manners, and forgotten all about the reasonably priced drinks.

The success of the evening leaves many anticipating the arrival of Jazz Legend Roy Ayers on December the 23rd, and a standing ovation even brings about an encore featuring a riff by Deep Purple.

When McKee takes the time to chat and sign autographs at the end, the crowd surrounding him can’t fail to go home happy: tonight’s one man mission to re-invent the guitar seems complete.

[Many thanks again to Roger for use of his photos]