Cllr Brading said he did not expect the news of the Governors decision to be in the public domain, but that they can do what they want. 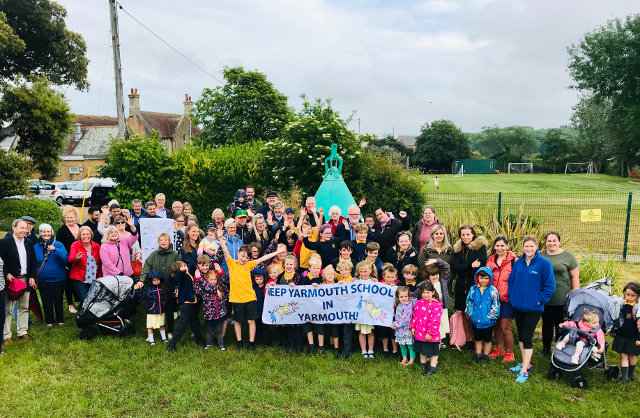 Around 30 parents and children held a protest outside the gates at Yarmouth Primary School yesterday (Thursday) — demanding their school remains open.

In a letter to parents, governors said they had ‘reluctantly’ agreed to moving the school to Freshwater following ‘frank conversations’ and ‘a very painful meeting’ with Isle of Wight Council officers.

At the protest, arranged by Keep Yarmouth School in Yarmouth action group, some parents said they had only just heard the news.

“I don’t know what to say. I am just devastated.

“This is destroying a really good, stable school on the chance of getting government money — but there is no assurance of it.”

Future remains uncertain
The future of primary schools in the West Wight — All Saints, Yarmouth, Freshwater, Shalfleet, Brighstone and St Saviour’s — remains uncertain, as the council has said it plans to close one school to reduce the number of surplus places.

Speaking at the protest, two families said they had relocated so their children could attend Yarmouth.

Parent: Confused why governors not behind parents
Alexander Wright, with his daughter Juno, who had moved from Fishbourne, said:

“If they do move the school, Juno will have to go to Northwood, which is ridiculous.

“I am confused to as why the governors are not entirely behind the parents. It makes no sense at all.”

Council has power to decide
Following a legal challenge in the summer, which saw the plans halted, the council told governors they had two main commitments — to retain a school in Freshwater and close one school in the wider region.

In their letter, governors said it was made clear to them that, ‘ultimately, the council had the power to decide the future of all the schools.’

Parent: “This is the least effective option “
One parent said:

“We want to try and save Yarmouth for the families.

“The council could do something which would be more effective and protect the future for the rest of the children. This is the least effective option and it is going to be absolutely damaging to Yarmouth.

“We don’t know what would be next. Why take a good school and move it down there just to save it? It is wrong, completely wrong.”

Brading: “The governors can do what they want”
At yesterday’s meeting of the council’s policy and scrutiny committee for children’s services, education and skills, cabinet member, Cllr Paul Brading, said about the letter:

“A paper is still being worked on. I can not comment on what I haven’t seen.

“I did not expect the news to be in the public domain but the governors can do what they want.”

A paper on the future of West Wight schools is due to be brought before the next cabinet meeting.