Could Dylan turn up for Million Dollar Bash? George Galloway reckons it might just happen

Controversial George Galloway, the firebrand former MP and broadcaster, rocked up at the London launch of the Island’s Million Dollar Bash festival – the event set to mark the 50th anniversary of the 1969 IW ‘Bob Dylan’ festival. 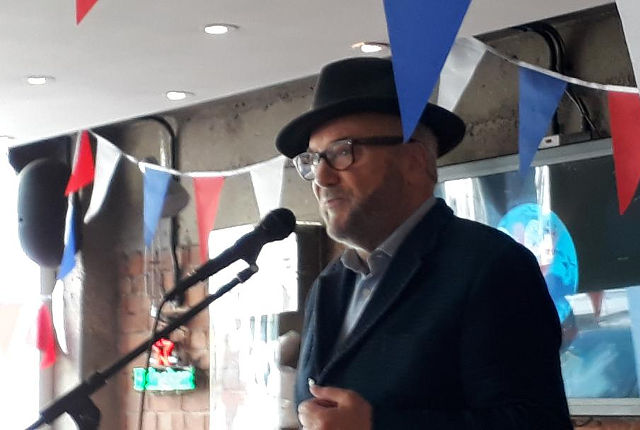 Controversial George Galloway, the firebrand former MP and broadcaster, rocked up at the London launch of the Isle of Wight’s Million Dollar Bash festival – the event set to mark the 50th anniversary of the 1969 IW ‘Bob Dylan’ festival – and said the main man might just drop in.

The Million Dollar Bash, a one-day festival set for Saturday 31st August at the County Showground, will feature a raft of top names including Richard Thompson and Wishbone Ash, plus several 1969 veterans such as folk legend, Julie Felix (pictured below).

And Mr Galloway, an arch Dylan fan, said an improbably appearance from the “spokesman for a generation” could not be ruled out.

Galloway: You never know, he might just turn up
At the Planet Hollywood launch on Monday (1st July) he said,

“One of Bob Dylan’s undeniably qualities is his unpredictability.

“We know he is going to be in the UK soon to play in London’s Hyde Park and – if he got to know about the Bash – you never know, he might just turn up!”

Would stand aside for Dylan
At present, Bash curator Ashley Hutchings MBE is assembling an all-star ‘Dylancentric’ band to close the Bash bill. Fairport Convention founder-member Hutchings was described by Dylan as “the single most important figure in English folk-rock”, but he immediately said he would stand aside if his hero made an impromptu return appearance on the Island.

“We are going to honour Bob’s 1969 Island appearance with Dylancentric.

“But if by some chance he decided to pop over to the IW again, I’d gladly step aside. Dylan’s appearance at the second Isle of Wight Festival was a magnificent coup for the Island.”

Singing and speaking
Joining George Galloway at the launch were singer-songwriters Deana Walmsley, runner-up in ITV’s The Voice earlier this year, and rising folk-rock star Blair Dunlop, a winner of the BBC Radio 2 Folk Horizon Award. Both performed two songs for the assembled guests and media.

And broadcaster Sally Magnusson, founder of the dementia and music charity Playlist For Life, spoke in support of the Bash’s aim to become the world’s first ‘dementia friendly’ rock festival. Playlist for Life is now an official partner of the Bash.

“Being reminded of special times – like 1969 – through music can be very powerful indeed.

“Dementia has all kinds of social effects which makes it difficult to take people who have its symptoms to big social events.

“So to make Million Dollar Bash dementia friendly – just to have quiet spaces and a place they can feel comfortable – is a very good thing indeed.”

Tickets are available online priced at £44.

Alternatively, IW discounted tickets are available at £40 from That 60’s Place, Cowes High Street, and at Dimbola Museum and Galleries, Freshwater.

1 Comment on "Could Dylan turn up for Million Dollar Bash? George Galloway reckons it might just happen"

newest oldest most voted
Ian Young
As a Dylan fan of over fifty five years standing I can say with some certainty he will not be in Northwood this August. Best not to try and tease people that he might be, even if the tease comes from the bastion of truth and honesty that is George Galloway. If you want to see Dylan this year get to Hyde Park on the 12th July.… Read more »
Vote Up14-3Vote Down